February 07, 2023
9 New Articles
Home CONCACAF The CONCACAF Women’s U-20 final: A friendly disguised as a championship 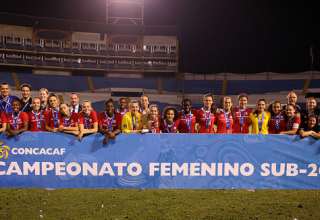 Daniel Worthington, the coach of the Canadian U-20 women’s team, treated Sunday’s CONCACAF final like a glorified friendly.

He used two 15-year-olds and three 16-year-olds in the 1-0 loss to the United States. Lysianne Proulx, born in 1999, got the start in goal, and it was her second-half errant pass that led to the Americans’ winning tally.

Canada’s approach to a regional final illustrated the big problem when it comes to youth tournaments that act as qualifiers for their respective World Cups. And that is: With the finalists already qualified for the Women’s U-20 World Cup, the, ahem, championship game means very little.

The CONCACAF Women’s U-20 Championship formula is simple; three teams qualify out of the tournament — the two finalists and the winner of the third-place game.

So, when Canada beat Mexico in penalties Friday in the semis, it booked its place in Papua New Guinea. After 120 grueling minutes Friday, the team had a little less than 48 hours to be ready for a final — but with qualification already assured, the CONCACAF trophy doesn’t mean all that much. And Canada treated the final that way, using the game as a means to give the youngest players on the team experience.

But that’s going to happen when the World Cup qualifying format means that the CONCACAF semifinal is a more important game than the final.

In the post-game press conference, Worthington said that Canada’s No. 1 goal was to qualify for the Women’s U-20 World Cup, then the No. 2 goal was to develop players. Winning the CONCACAF tournament — not on that list.

“It’s about the bigger picture, it’s about the EXCEL program, it’s about the women’s national-team program and increasing the positional threshold. And you don’t do that unless you give kids a chance in big games,” Worthington said after the final.