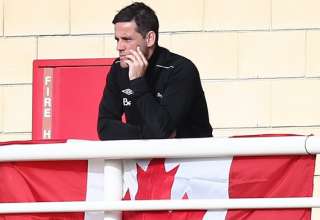 We’re now at the stage of the poker game where it’s time to call. We’ve gone through the bets, the bluffs and the folds.

As Canada’s national women’s team prepares for the Cyprus Cup — its final tournament before the Women’s World Cup, coach John Herdman knows he has very few secrets left to keep. He knows he has to have his team playing to its strengths — and that means there’s very little left to hold back and to keep those scouting for their World Cup opponents guessing.

“You can’t hide everything,” Herdman said in a conference call on Tuesday. “You’ve got to do what you do better than the other teams.

“There’s not too many cards left up our sleeves.”

Canada begins group-stage play on Wednesday. Scotland, not a World Cup side, will provide the opposition. Then it’s South Korea, a World Cup qualifier that won’t be in Canada’s WWC first-round group, and then another non-World Cup side, Italy.

Herdman said that if Canada gets into a Cyprus Cup crossover playoff with the Netherlands, he might alter things a bit, as the Dutch are in Canada’s World Cup group. Really, of all the teams Herdman will want to scout at the Cyprus Cup, the Dutch are at the top of the list.

He said the Netherlands is a perfect example of a former “tier three” women’s soccer nation that is breaking through. And he wants a first-hand look at Dutch teenager Vivianne Miedema.

“It looks like she was born to score goals,” said Herdman.

That might be an understatement. In the UEFA playoff against Italy, which qualified the Dutch for the World Cup, Miedema scored all three of her team’s goals over the two legs. She’s scored five times in 11 matches for Bayern Munich so far this season. As a 17-year-old, she scored 41 times in 26 matches for Dutch side, Heerenveen.

Even though Herdman admitted he’d already put a lot of his cards on the table, he said that tactically, his Canadian side will still need to be able to surprise a lot of opponents. When asked about what he thought his team’s shape would be at the Cyprus Cup or at the Women’s World Cup, he simply answered that Canada’s success would depend on it “being the most organized team.”

But, is there still time for a player to get into the squad or make their way into the starting XI? With midfielder Diana Matheson still recovering from a knee injury suffered in a friendly against Japan last year, and fullback Lauren Sesselmann a doubt because of her knee problem, there could still be time for Herdman to move a player in or out.

“We’re at the point where we start bringing the group together, to build partnerships. But there are still opportunities; the door is always open.”