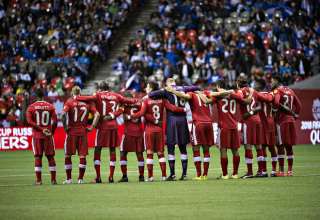 Next March 25, the eyes of Canadian (and Mexican) soccer fans will likely be on Vancouver’s BC Place.

Canadian national-team head coach Benito Floro all but confirmed that his team’s next home World Cup qualifier will be played in the same venue where more than 20,000 rocked and rolled Friday, and saw the home side come out with a vital 1-0 win against Honduras.

Floro spoke about the need to return to a place which has given Canada the most vocal support it’s received in his time as the coach. He said he was “sure” the game would be played in Vancouver. So much for any of the theories out there that, because of the artificial turf, the flight distance, the fact that SkyTrains have no drivers, that it’s an El Niño year… that the Vancouver game would be a one-off.

For such an important game as Canada-Mexico, Floro understand that Canada needs the most bang out of its home advantage that it can possibly have. An open-air game (you and I both know that, like the game against Honduras, that roof will be open) on a cool early spring evening. For most Canadians, it will be pleasant. For the Mexicans, it will be cold.

Case in point: With the roof open, on what most Canadians would call a pleasant night, the Honduran coaching staff were wearing heavy winter jackets. One of the Honduran journalists asked Floro after the game about the cold. Floro laughed and showed that he only wore his suit jacket outside.

As well, BC Place offers the advantage of playing on artificial turf. Friday’s game likely has killed the “Canada-will-always-want-to-play-men’s-games-on-grass” argument dead. Now, saying “but they have to play on grass” will be like admitting to people that you own rap-metal records. It’s a dated argument. Not only was Floro enthusiastic about the venue, but the players were as well. Many of them came out and spoke to the media after Friday’s game. Not one complained about the playing surface, but pretty well all of them talked about how fantastically well Vancouver performed as a host city. Player after player referred to Friday’s atmosphere as best-ever for a Canadian home game.

What does it tell you? Players’ first concern is the number of supporters in the stands. They don’t care about an extra flight if the fans show up. Now, the Canada-must-play-in-the-East direct-flights-to-Europe argument has finally been blown out of the water, as well. Put that in a box with the piano-key neckties.

Look, for an international game, playing on turf is a major advantage for Canada. And, for our players, there are two ways to look at it.

1. For the MLS/NASL guys, they likely play on turf a lot of the time anyway.
2. For the guys playing in other parts of the world, playing on turf is an issue if you have to do it regularly. But coming in for a camp and for one game? Meh.

Look, if the turf-gives-Canada-an-advantage things works out, we might come to a time that, when it comes to booking qualifiers, stadiums that have plastic pitches may have advantages over grass fields. I’m not saying we’re at that point yet, but we’re definitely at the point where trying to leverage one over the other is moot.

Where Canada plays its games has caused unnecessary provincial divides for too long. But, on Friday night, at the post-game party at Doolin’s — strategically placed up the hill from BC Place so you face a long stretch of inclined walking before you can put a whiskey to your lips — I met supporters from across Canada. Toronto, Regina, Moose Jaw, Edmonton and from different parts of British Columbia. It’s fantastic to see so many people from different parts of the country getting together to cheer on the national team, and to share a few stories and drinks. And, honestly, the flight from Edmonton to Vancouver took less time than many streetcar rides to BMO Field I have endured in my lifetime.

As many of you know, I don’t live in Vancouver; so, for me to say that Floro is bang-on in briningg the national team back to the Pacific coast isn’t a case of unbridled civic boosterism. I’ve seen too many Edmonton poorly attended games (too cold, too hot, game kicked off at a bad time, game was played at the same time as an Oilers game, name the excuse) to dare put the Alberta capital in the running. In the case of Toronto, for reasons mentioned above, I don’t like the idea of putting a qualifier against Mexico on grass, unless BMO Field promises to hire the groundskeeper who looks after that stadium in Cuba. (Same goes for Stade Saputo.) Olympic Stadium doesn’t offer the ability to open the roof if the weather is inhospitable — which BC Place can do. Ottawa is intriguing; open air, artificial turf. But I think we need to see regular crowds of 9,000-plus for Fury games — not just the playoff crowd of last week — before going there.