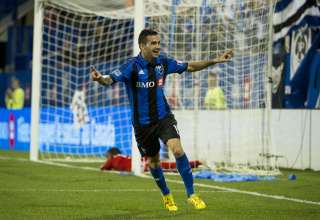 For the first time in five years, the Amway Canadian Championship will not be awarded to Toronto FC, soundly drubbed by a Montreal Impact squad eager to erase its lacklustre performance of last Wednesday from its followers’ hearts and minds.

The 6-0 score probably did just that, provoking numerous pyrotechnic displays and enticing the almost 15,000 fans in attendance to end the game with repeated refrains of a Montreal standard usually reserved for the ice rink.

A contingent remained behind afterwards, singing as they awaited their heroes’ departure from Saputo Stadium for over an hour once hostilities came to an end.

“I felt all day that we were going to have a good result,” said head coach Marco Schallibaum. “I also felt it yesterday in training and during my pregame speech tonight. The guys were pumped.

“It’s easy to say after a 6-0 victory,” he continued. “But some days are like that. I felt our base was very strong. The team reminded me of an injured tiger — very dangerous.”

The victory did not come without a price for the Impact, who saw a number of players injured.

“You saw passion. You saw fight. You saw bloody mouths and bloody knees. The crowd was unbelievable and this is a game we’ll never forget,” declared defender Jeb Brovsky after the match.

Robert Earnshaw’s shot bounced off the post to the right of Montreal ‘keeper Evan Bush in the opening minute. It would prove to be the Reds best chance of the evening. The Welsh forward would also have other opportunities in the early going.

“We had some luck tonight,“ admitted Schallibaum. “Especially in the first minute when they hit the post but this win was due to strength of character, belief in ourselves as individuals and as a team and to pride. I’m proud to be the coach of this team and I saw a lot of players who did a lot for the club tonight.”

Montreal took a 3-0 lead into the interval with the goals coming courtesy of midfielders Justin Mapp and Daniele Paponi, with Italian striker Marco Di Vaio completing the scoring for the opening half. Montreal had eliminated the deficit it had accumulated in the opening game of the semi-final.

Mapp, playing his strongest game since joining the Impact, opened the scoring in the 24th minute, the goal the result of a pass from Andres Romero. Paponi potted the second on the rebound from a Mapp shot and, minutes later, was forced to leave the game after injuring a hamstring. Medical tests will be performed tomorrow but the Argentine is not expected back on the pitch for several weeks.

Replacing the fallen Paponi, Marco Di Vaio got his first of the night in the 44th minute, six minutes after subbing in.

TFC managed a single shot on goal in the opening 45 minutes of play. Kyle Bekker was the man responsible for the try, which came 41 minutes after play began.

The second half continued in the same vein as the first, with Montreal dominating and Toronto scrambling to keep up. The goals kept coming for the home side as did the injuries. Captain Davy Arnaud was felled by a ball that struck him in the temple and left the game after getting on-field attention, replaced by Collen Warner. He was declared doubtful for Saturday’s game in Kansas City.

In the 61st minute, Romero scored the Impact’s fourth, the service courtesy of Di Vaio. The Argentine stepped neatly around Toronto goalkeeper, Stefan Frei, and sent the ball into the mesh behind him, a sliding TFC teammate unable to get to it in time.

In the 72nd minute the Impact casualty list lengthened as goalkeeper Evan Bush collided with Hassoun Camara’s left elbow when both were going for a ball. Blood flowed but Bush stayed in the game, donning a new shirt and performing with one nostril plugged with absorbent.

“I don’t know if it’s (his nose) broken, said Bush. “ I’ve broken it before a few times and it doesn’t hurt as much as it did then but we’ll find out for sure tomorrow.”

He was also pleased that he and his cohorts had carried the day.

“We had a bad taste in our mouth all week,” he said. “We got a good result on Saturday but we also knew that this Canadian Championship means a lot to the city and to the fans.

“One of the things the coach talks about all the time is having character,” he said. “There were a couple of times when I came out. Hassoun got me with the elbow but there were a couple other times I had to come out in traffic and show some character and I was glad I could do that.”

The two final goals of the evening came in extra time. One coming when Di Vaio put away the rebound from a Justin Mapp drive that Frei managed to push aside and the other in the last seconds when the former Bologna star’s long through pass found Andrew Wenger and the lightly used forward put it home, pumping his fist in what was probably both satisfaction and relief at finding the mesh for the first time this season.

Toronto head coach Ryan Nelson was succinct in his appraisal of the match, beginning his remarks by saying that his boys were in the game for the opening 10 minutes.

“After that we pretty much lost every key play and Montreal just punished us,” he said.

TFC didn’t give up, according to the gaffer.

“They were just inexperienced. They chased things that weren’t there. They gambled, they lost shape and just got punished.”

Montreal moves on to the finals of the Amway Canadian Championship, meeting the Vancouver Whitecaps on May 15 and 29.