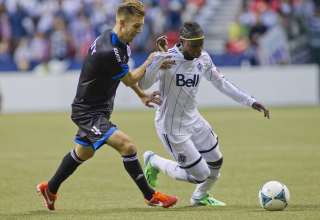 Of the four times the Whitecaps have beaten in FC Edmonton in Amway Canadian Championship action over the past two years, Wednesday’s win was the most comprehensive.

Oh, there have been more lopsided scorelines than Wednesday’s 2-0 result at BC Place — which, paired with a 3-2 road win in the first leg of the semifinal last week, sets up a Whitecaps/Impact ACC final. But in terms of chances created and the possession gap, the Whitecaps dominated by a huge margin.

Maybe some FC Edmonton supporters will scream injustice, and point to the fact that Corey Hertzog’s opening goal, a 30-yard screamer, came after Eddies’ centre back Adrian LeRoy was sent off for what was ruled a professional foul. Hertzog drew the red-card foul just minutes after coming into the game as a a halftime sub, so the goal rubbed salt in the wound.

“All week, me and the goalie coach have worked on volleys. Tonight was a good one,” said Hertzog after the game.

“To tell the truth, I thought we gave them too much space to play the ball from the back,” said FCE midfielder Robert Garrett. “Allowed them to play the long ball forward that they like to. But maybe we can keep it 0-0 and we can nick a goal, and maybe get another one. Then we have a man sent off and their boy, he hits an absolute screamer and ends the tie.”

FCE coach Colin Miller, who was suspended for the match because of a sideline outburst last week, had to watch the game from the stands. And it allowed him to get a couple of looks on the LeRoy foul.

He was careful not to criticize the ref, but how the rule is applied.

“I think there has to be something in the spirit of the game; there’s two players staring at the ball, the contact was totally unintentional. Their legs get tangled.”

A 67th minute own goal from FCE sub Shaun Saiko off a Russell Teibert corner kick continued the avalanche.

But the truth is that the Whitecaps should have already been up by a lot by halftime. They came out of the gates like they were down 3-2, not up a goal with three road gals in the bank. They dominated possession, had corner after corner — and, most importantly, pushed Eddies’ fullbacks Edson Edward and Antonio Rago so far back, they could never create counter attacks. Last week, fullbacks Lance Laing and Edward created all sorts of problems for the Caps.

Through the first half, with the number of chances created, the game already felt like the Whitecaps were up a man — LeRoy’s red card was merely a formality.

Tom Heinemann smashed a volley just wide after a flick-on from Russell Teibert. Camilo had an open shot from the top of the box, but put it right at FCE keeper Lance Parker. Darren Mattocks got in behind the Eddies’ back line, but smashed his attempt off the post. Gershon Koffie smashed an attempt just wide of goal. Mattocks, unmarked in the middle of the FCE penalty area, deflected a Heinemann cross over the bar.

Miller said the pregame plan was to defend, defend, defend in the first half and then bring on fresher legs in Fordyce and Saiko to try and nick the two goals the Eddies needed. But the red card and Hertzog burned up that plan

When the starting lineups were announced, the game already had an ominous feel for the Eddies. Laing, who took an elbow to the head from San Antonio’s Hans Denissen in Sunday’s NASL match, wasn’t cleared to play. That put the Eddies behind the eight-ball right off the top, as Laing set up both of FCE’s goals in last week’s first leg and was the best Eddie on the pitch at Commonwealth Stadium

Saiko, the reigning NASL Player of the Week, was on the bench to start the game, as was Northern Irish forward Daryl Fordyce. Both came in during the second half.

After the Whitecaps went up two, the pace of the game slowed considerably, but Parker did make a late acrobatic save to rob Andy O’Brien of a headed goal after a Whitecaps’ free kick wasn’t cleared out of the area. And Saiko did have a late chance at a consolation goal, with a hard shot directed right at Brad Knighton that deflected off the Whitecaps’ keeper and rolled just wide of the post.

As well, Whitecaps coach Martin Rennie singled out the play of Teibert, who played in the middle of the park and won ball after ball.

“Over the last few games he’s played for us, he’s done really well. It’s encouraging for us to get a young Canadian player through the system.”