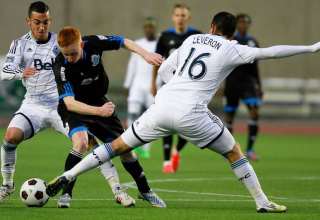 The Vancouver Whitecaps are happy with where they stand going into Wednesday’s second leg of the Canadian Championship semifinal against FC Edmonton, but know they must maintain readiness from the first whistle.

Leading 3-2 on aggregate after last week’s controversial win over the Alberta-based NASL side, in which Camilo scored a goal in which Darren Mattocks appeared to be involved in the play from an offside position before scoring again from a penalty earned with minimal contact, the Whitecaps are hoping – but not expecting – smoother sailing in the second leg.

“It can be a situation where they have a lot more to gain than we do,” said Tom Heinemann after a training session at BC Place on Tuesday in relation to FC Edmonton. “I think clubs take advantage of that. I’ve been on the other side of the ball with clubs – with Charleston [Battery]. We cherished the opportunity to go into MLS clubs and try and take it to them, and beat them.

It’s not as if Whitecaps head coach Martin Rennie sent a weak lineup out in the first leg, playing first team stars like Nigel Reo-Coker, Andy O’Brien and Camilo, among others. So it’s difficult to suggest that he isn’t taking the tie or FC Edmonton with due respect.

Given the way that match played out, Rennie insists he will once again include some of his premier players in an effort to see his team through to the final against the winner of Toronto FC and Montreal Impact.

“We’re only halfway through the game,” Rennie said of the tie. “It wasn’t like it was an easy game for us at all. We had to work very hard in the last game so, yeah, it’ll be another strong lineup and I think a lot of guys really focused and hungry to do well.”

One star who won’t be available for selection, however, is designated player Kenny Miller. The Scotland international has only figured in three matches this season due to a hamstring problem, and on Monday he suffered a setback expected to keep him out of contention for another couple of weeks.

“He looked good, he was training well, he trained on Saturday, looked excellent,” Rennie said. “He would have started the game [against FC Edmonton], and then just felt it again. It’s a strange one because it’s not like a pull or a bad one.

“So we really think that he’s going to be back very soon but we were hoping that he would be back for this game and he’s not going to be.”

A player who is sure to figure is goalkeeper Brad Knighton, who must be in consideration for Saturday’s MLS match as well given Joe Cannon’s struggles on Saturday against FC Dallas, in which he was at least partially culpable on both goals conceded.

“I feel like all the players have got a chance to be starters,” Rennie said when asked about Knighton potentially using this match as a springboard to earn his No. 1 spot back. “I think Brad did well when he played last season and he’s done well when he’s played this season.

“For him, he just has to focus on this game and after that we can decide what the lineup is for [Real] Salt Lake. But right now it’s just a focus on Edmonton now I think.”

One edge Vancouver does have, beyond its superior MLS resources, is the availability of its coach. The Eddies aren’t so lucky after their head coach Colin Miller was ejected after reacting angrily to Camilo’s penalty goal last week.

Under Canadian Soccer Association rules, due to that ejection and his subsequent suspension Miller is banned from communicating with his team within the stadium, which means no locker room or tunnel access, and no communication of any kind with players or staff down on the touchline.

“Colin’s an experienced coach and a very good coach, and sometimes it’s easier to make adjustments when you’re in the dugout,” Rennie said. “It does make a difference if you’re not able to communicate at all at any point in the game because the adjustments you want to make you can’t make.”