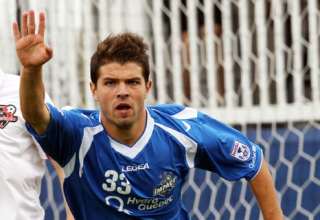 With his team’s final NASL season circling the drain, Impact coach Nick De Santis put out a line-up that some may have felt was randomly drawn from a hat, but one that paid dividends as the Montreal side ran roughshod over the last-place Atlanta Silverbacks, taking a 4-0 decision in front of some 11,000 delighted fans.

Midfielders Luke Kremalmeyer and Hassoun Camara took to the pitch as defenders while regular backliners Phillipe Billy and Anthony Le Gall were relegated to the sidelines and Newcomer Sinisa Ubiparipovic made his first start of the season at forward as did Mircea Ilcu, joining the ageless wonder Eduardo Sebrango up front.

Shaking things up paid dividends for the Impact as they treated their long-suffering fans to the type of show that they had been expecting since opening day, as both newbies got their initial goals as members of the team and 39-year-old Sebrango continued to astound.

Surveying implements would probably show that the field was as level as ever but many in attendance would beg to differ, given the way the host team dominated its last-place opponent.

Getting its first chances in the opening minutes, Montreal drew first blood in the third minute. Rookie Ilcu, who began the season with the Impact’s U21 side, accepted a Ryan Pore pass, spun around Atlanta defender Patrick Robertson, and buried the ball in the mesh for his first goal with the club.

“It’s amazing,” the rookie declared after the match. “A dream come true. First game — first goal. I hope there’ll be a lot more. Before the game I was a little stressed but as soon as I stepped onto the field everything went great and I did my job.”

“I’m extremely happy for Mircea. For the past two months he’s been very consistent in practice,” he offered. “We just felt that we need players that are going to go to war for each other and he’s one of them. Not only did he score a beautiful goal but he worked his butt off. He got his chance and he ran with it.”

Five minutes later it was Camara’s turn to put one behind Silverbacks keeper Jimmy Maurer and he did it with style, slamming home a bicycle kick from about 30 feet out.

Extending its domination and its lead, Montreal added a third marker in the 35th minute, this one off the foot of Ubiparipovic, who converted a Sebrango pass, one of many the acting captain made in a game where he more than kept his own against opponents a generation younger, outthinking and outrunning them to lead the Impact offence.

De Santis also had words of praise for the recently arrived forward.

“If you give him space he’ll find the right ball all the time. Today we played in a diamond and they had trouble dealing with it,” he said. “He got himself in good areas. He’s a very smart player, not the fastest but he thinks fast. His goal was excellent. It’s a good thing we scored some goals because we wanted to keep him on the field as long as possible because the biggest thing is to get game-fit and I’m happy he went the whole 90 minutes.”

The Silverbacks, who barely touched the ball in the opening half, continued to play in the same vein as the second got underway. Montreal, who allowed two in the closing minutes of their last game to settle for a tie, did not repeat their miscues of a week ago.

The Impact, with Sebrango leading the way, maintained the pressure and multiplies their opportunities as the Atlanta side was unable to reverse the game’s momentum. The veteran striker had a goal called back shortly after the second half got underway when referee Carol Ann Chenard declared him offside.
At the 70-minute mark, Mignane Diouf, who had subbed in for Ilcu three minutes earlier, sprung Ryan Pore with a pass down the right side but the forward’s shot missed to the left of the goal.

Diouf would make it 4-0 in the 80th minute, converting a Ubiparipovic pass from point-blank range for his third of the season.

“We came in with the mindset that we were not going to give anything away,” said De Santis.” We were able to put a lot of pressure on them and dictate the offensive flow of the game. We created chances tonight. Ilcu and Sebrango were able to create room in the midfield for Sinisa, for Pore, Westlake and Amir (Lowery). Overall it was an incredible effort.”

Trailing sixth-place Edmonton, who tied Fort Lauderdale this evening, by nine points going into tonight’s action, the Impact picked up a pair of points on the Eddies. It is now seven points out of a playoff berth with seven games to go in the regular season.

Montreal closes out its five-game home stand against Minnesota on Saturday.

• Today’s game was Nick De Santis’ 137th as Impact gaffer, tying him for the all-time club lead with Valerio Gazzola. His record over that time is 71-32-34

•The Atlanta Silverbacks have never won a game in Montreal, posting an all-time record of 0-13 -1 since 1995 when being hosted by the Impact.

• Eduardo Sebrango’s five goals so far this season, accumulated over 480 minutes in eight games before today’s, match his output from last year, amassed over 25 appearances, and 1155 minutes on the pitch