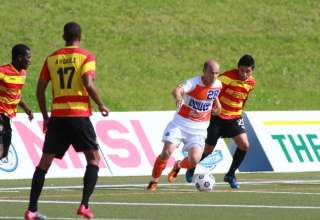 The good news? FC Edmonton’s five-game losing streak is over. The bad news? The Eddies gave up a sloppy late goal and threw two points away, being forced to settle for a 1-1 draw with the Fort Lauderdale Strikers Sunday at Foote Field.

With Montreal beating Atlanta Sunday, the Eddies’ lead over the Impact now sits at a precarious seven points.

“I’m kinda at a loss for words right now,” said central defender Paul Hamilton, who scored off a corner in the first half. “We were playing really well. We had a lot of opportunities, even after they scored.”

FC Edmonton had done a good job of crowding the midfield and limiting Fort Lauderdale’s chances. Up to the 79th-minute equalizer, the Strikers had threatened FCE keeper Rein Baart with one, count it, one decent chance. Former Philadelphia Union defender Toni Stahl hammered a volley that forced Baart into an excellent diving stop.

But the Eddies, wearing their 1982 NASL Edmonton Drillers retro jerseys, undid all of their hard work with a defensive mixup. On a Strikers’ free kick, Santamaria was left wide open in the penalty area. Santamaria made an attempt at an overhead kick, fluffed it, but it still had enough on it to cross the line.

“Someone lost their mark on the free kick,” said Hamilton. “We got punished for it.”

Edmonton was also punished for being wasteful in front of goal. Kyle Yamada missed the goal on two great second-half chances. After the game, he was the last one off the field, hands on his head, thinking of what might have been.

FCE coach Harry Sinkgraven made some interesting changes to the lineup, moving away from a 4-3-3 to what was, on paper, a 4-4-2. But, it looked more like a 4-5-1 with Michael Cox, getting a rare start alone as the target man.

FCE’s co-leading scorers, Shaun Saiko and Kyle Porter, were both out. Saiko was suspended for yellow-card accumulation, while Porter was an, ahem, curious coach’s decision.

The Eddies’ were able to clog the midfield and the first half was filled with physical battles and 50-50 balls. Fort Lauderdale’s Walter Restrepo had to leave after clashing with FCE’s Chris Kooy. He also got the worst of a few tackles from Dominic Oppong.

Off a corner, Hamilton climbed well over a pack of Fort Lauderdale defenders and headed the ball down. The ball hit Fort Lauderdale’s Martin Nunez in the face, but was hit enough power to get over the line.

For most of the second half, it looked like the goal would stand as the winner.

And, after the equalizer — FCE had more chances to get the winner, as the Strikers held on for the draw. Eddy Sidra, with his second strong start in a row, made some great runs down the left side.

And Paul Craig, coming on as a 60th minute sub for Cox, created a heck of a chance, controlling a long, lofted pass off his shin, then up to his chest. He then launched a low drive on goal that Fort Lauderdale striker Matt Glaeser did well to stop.

FCE has seen itself plummet from second to sixth in the NASL standings in just over a month. Hamilton promised that the stretch run will be netter.

“We know the pressure is on; but we know we will thrive when we get there.”