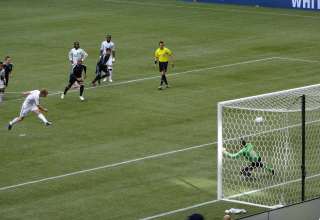 Barry Robson’s 62nd minute penalty gave the Vancouver Whitecaps their first win in five matches, as they defeated the San Jose Earthquakes 2-1 on Sunday at BC Place.

Camilo earned the penalty after Sam Cronin clipped him in the box, and wanted to take it himself – but Robson grabbed the ball and wouldn’t let go, stepping up to power home his driven penalty winner.

Whitecaps head coach Martin Rennie admitted there was no plan in place over who would take a potential penalty due to the fact the club had yet to receive a single penalty in MLS play this season.

“Usually we do put it up on the board and make sure that they know,” Rennie said. “But we’ve never had a penalty so it got to the point that we were debating it a bit and not putting it out there.”

But once the decision was made, Robson showed conviction with his strike, choosing power over precision.

“Just hit it as hard as I can,” Robson said of what was going through his mind prior to the strike. “It went in the corner thankfully. If you hit the penalties hard, even if the goalie picks the right side if you’ve got a bit of power on it they still might not be able to save it. If you don’t hit them so hard they have a real chance at saving them.

“It’s just about whether you’ve got the bottle to step up and hit it as hard as that.”

Dane Richards scored the opener of the match 20 minutes in, and terrorized left fullback Justin Morrow throughout the evening with his pace and clever off-the-ball runs.

For his strike, the Jamaican nipped in behind Morrow to latch onto a through ball from Lee Young-Pyo before beating Jon Busch with a powerful shot from close range.

“Most defenders try to cover my pace,” Richards said. “I just needed a good first touch, and then I just ripped it far post.”

Despite the angle, Richards insisted he never thought about anything other than a shot once he got the ball.

“As I was getting the ball, I said, ‘good first touch, then I’m just going to rip it,’” Richards said. “If he stops it, it could be a tap in for [Darren] Mattocks, so I just want to rip it — and it went through him.”

Alan Gordon was San Jose’s goalscorer, converting a cross from Marvin Chavez in the 38th minute to bring the game level at 1-1 — but Earthquakes coach Frank Yallop was more concerned with the nature of how the game was won.

“It should have been a tie,” Yallop said. “The referee decided the game — well, undecided the game, to be honest. He’s five yards away and he lets [the assistant referee] 50 yards away call it, so I was disappointed with that.

“His first reaction is always the right one and he said, ‘get up,’ and then he looks over and gives a penalty kick. We had chances after that to score, but it was a big game changer.”

The Whitecaps, 9-6-7 following the win, now prepare for a Friday night matchup against Real Salt Lake at Rio Tinto Stadium.