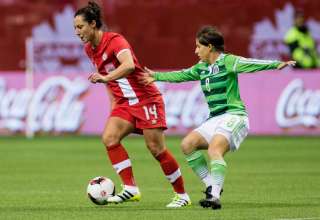 Melissa Tancredi made her Canadian national-team debut as a defender. But, thanks to some encouragement from Christine Sinclair, she was moved to forward — and a magical career had begun…

But her soccer journey, now complete (at least as a player) after a 3-2 win in a “celebration” friendly win over Mexico at BC Place in early February, has been anything but direct.

The Hamilton native’s career has been largely unconventional. On the field, her height and strength prompted coaches to use her as a centre back, where she starred at the University of Notre Dame.

And indeed that’s the position where she began her international adventure at the senior level, playing in the 2004 Olympic qualifying tournament in Costa Rica.

“I was a left centre back, and it was terrifying,” Tancredi tells me during a training session at B.C. Place before her final match, reflecting on her first appearance for Canada as a senior player. “I just knew that I was so nervous. I knew that I was so excited to put on that jersey. It was a dream. Playing alongside Charmaine Hooper, Christine Latham, I was playing next to Sharolta Nonen, just these girls I looked up to as a kid. Andrea Neil. And to be able to get the starting position because they were kind of low on defenders at the time, I got the call-up. I was so excited but, at the same time, I had no idea what it meant.

“Now I know what it feels like to put on that jersey and have the weight of a country on your shoulders. It’s kind of nuts.”

It wasn’t long before there was a temptation to use her power in a more offensive role. She was moved up to midfield, but didn’t quite click in that position.

That’s when Christine Sinclair had a word in the coach’s ear. In retrospect, it’s easy to see what Sinclair saw in her teammate. In many respects Tancredi has done a lot of the ugly target work that has allowed Sinclair to be so dominant for so long.

Sinclair, a powerful, physical player herself, has enjoyed the benefits of focusing on second balls flicked on by Tancredi rather than being the target player herself. The road to goal has always seemed a lot clearer whenever “Tank” has been on the field to act as battering ram.

“We’ve literally taken on the world together and shared heartbreaks and had our dreams come true in Olympic Games,” reflects Sinclair, speaking to reporters after Canada’s win over Mexico in reference to the retiring trio of Tancredi, Rhian Wilkinson and Marie-Eve Nault. “It’s been quite the ride.”

Quite the ride indeed.

Perhaps many observers felt Tancredi had made her last meaningful contribution as a player when she left the team following its bronze medal win at the London 2012 Olympics – a tournament during which she starred with a four-goal contribution.

Elite athletes don’t leave a sport around the age 30 mark to pursue a degree, as Tancredi did, and expect to return.

And Tancredi didn’t necessarily anticipate that either.

She just knew that if she didn’t complete her chiropractic training after that tournament, it simply wouldn’t happen.

So Tancredi took the unconventional route, and walked away from the national team for more than two years to ensure a future after soccer.

And then she did that rare thing. She came back.

After enduring heartbreak by crashing out in the quarterfinals of the 2015 World Cup, the squad rebounded to secure a second bronze medal at the 2016 Rio Olympics.

Tancredi played a crucial role in the team’s success again in that tournament with one of the best all-time individual performances in the Canadian women’s game, scoring a brace against Germany in a 2-1 win — the only win this country has claimed against the European powerhouse.

Some credit that performance as a key moment which propelled the team to its second bronze medal in as many Olympic games.

With this match now in the books, Tancredi finishes her career at age 35 with 27 goals from 125 appearances. Not bad for a player who sat out two of her peak years.

While happy to pursue her career now as a chiropractor in Vancouver, she also has an eye on potentially joining the national team again down the line as a member of the medical team.

But for now it’s time to pass the torch to a promising young crop of players, some of whom have already tasted Olympic success.

“We’ve worked our asses off – our butts off, excuse me – to get them to where we are right now,” says Tancredi, referencing the team’s position as No. 4 in the world in the FIFA rankings. “We’re now a threat, a consistent world threat. My only message to them is to enjoy it, but at the same time, know the shoes you’re filling.

“You need to take this team to another level.”