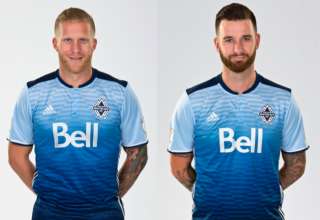 New Vancouver Whitecaps signings David Edgar and Marcel de Jong have some advice for young players; if it’s a choice between taking the long-shot in Europe or developing with a Canadian club — choose Canada

It isn’t too often that a Canadian scores against Manchester United. It’s even rarer when a player does that on his home debut.

So, for the hardcore Canadian soccer fan, whatever happened to David Edgar after that moment, he’d be remembered. But that goal, scored for Newcastle United back in January 2007, seems an awfully long time ago now.

Edgar has put together a respectable career over the better part of the last decade since that marker, lining up for the likes of well known clubs Burnley, Swansea, Birmingham, Huddersfield Town and Sheffield United, with most of his matches played in England’s second tier, the Championship.

But now, he’s back home in Canada, having signed with the Vancouver Whitecaps in July on an 18-month deal.

The amount of teams the Kitchener, Ont. native has played for over his career perhaps tell part of the story why he’s decided to come home to the country he left when he was just 14 years old.

Now 29, with a wife and young daughter, the big centre back is hoping for some stability.

“You get to play in some of the best places across North America, good facilities, good coaching,” says Edgar. “Or, you could be playing on a rainy Tuesday night in northern England. You’ve got to think of lifestyle, as well. With a young family, that was part of the decision as well.”

For many, the idea of playing in Europe, and England specifically, is a real fantasy. But Edgar’s comment about playing on a wet day in the middle of the week speaks to some of the realities and the dreariness that comes with playing in that country’s lower tiers.

There’s no question that playing in the Premier League has its perks. Giant stadiums, big contracts, roaring crowds and world-class facilities.

But you don’t have to drop that far down the English soccer pyramid for that experience to change substantially. For Edgar, apart from brief tastes of the top ight with Newcastle United and Burnley – he only played 23 league matches at that level between 2006 and 2010 – the experience was a good one, but came with its bumps.

“I moved over when I was 14 and that was tough,” says Edgar. “It’s a real working class environment in football over there. It’s not a bad thing to say. But you’ve got to fight and claw for everything. Nothing’s handed to you over there. As a young boy coming through, you had to deal with that.”

It’s not that the player is here for a holiday or an early semi-retirement. But if it’s a choice between nding a team on the lower end of the English Championship or League 1, where he played with Sheffield United on loan from Birmingham last season, or coming over to North America to play in Major League Soccer for the Vancouver Whitecaps, his choice is perhaps less surprising than you might think.

Speaking with Edgar, the thing that comes up in our conversation at the Whitecaps’ University of British Columbia training ground multiple times is the quality of life in Vancouver compared with England.

He’s living in a scenic part of town, renting an apart- ment in the Olympic Village ahead of finding more permanent accommodations with his family at season’s end.

He envisions a time when future young Canadian players never have to move to Europe in the early stages of their careers, and can instead establish themselves in Major League Soccer — something that has really yet to come to fruition on a regular level with the residency and academy programs in Vancouver, Toronto and Montreal.

“Why not? If we’ve got the MLS league here, why not keep the best Canadians? It helps the Canadian national team, it helps everything,” says Edgar. “But it needs to start from grassroots. Clubs like Vancouver, Toronto and Montreal are giving young players an opportunity to hone their skills at a grassroots and professional level.”

In the case of young Canadians, Edgar describes a move to Europe as a low-percentage play. The truly exceptional talent might make the breakthrough but, if it’s a close call, clubs will always side with a player with local, or at the very least, European connections.

He says that, in his case, he wasn’t always viewed strictly as a foreign player given he moved over there so young and his father was a former professional player from the area.

“By the time I moved through the academy I was classed as a local boy because of my background,” says Edgar. “It was good. But you’ve got to be better than the players that they’ve got. They’re not going to take a player if you’re just as good as – if you know what I mean – when they can get a local player at the same level as you.”

These are early days for Edgar with the Whitecaps, but already he has some interesting insights on the North American game. Fascinatingly, he believes MLS is more technical on average than what he saw in England.

“I think it’s a very good standard,” says Edgar. “You can see the technical ability of the players. A lot of people in England think the game’s real slow. I said, that’s because it has to be slow, when it’s 40 degrees in places like Houston and Dallas, sometimes it is slow. But when you’re in it, it’s definitely not. It’s definitely different.”

Edgar isn’t the only Canadian national team player to sign up for the Whitecaps this season. Fraser Aird is in a different stage of his career, but like Edgar, moved to the United Kingdom in his teens to sign a pro deal.

In Aird’s case that was with Rangers, the storied Scottish side. The 21-year-old joined the ‘Caps on loan at the start of the MLS season, and has featured regularly, first as a fullback, and in more recent times in his natural position as a winger.

Realistically, the Toronto native would like to use his time with the ‘Caps as a springboard to get himself back in the frame with Rangers. The fact the league can realistically o er that potential to him could be viewed as an indicator of the steps MLS is taking to improve its reputation abroad.

The third national teamer to link up with the ‘Caps is Marcel de Jong, who is a different story again. He hasn’t arrived at the club directly from Europe, having first joined Sporting Kansas City last year before playing for a brief while this year with the North American Soccer League’s Ottawa Fury.

Although born in Canada, de Jong was raised in Europe — so it’s not an entirely parallel tale. In his case, his decision to come to North America was based more on having new life experiences, on and off the field.

“I was in Europe my whole life,” says de Jong. “I just always said, I wanted to play in the MLS, so that was behind my choice.”

Interestingly, de Jong echoed some of Edgar’s comments about young Canadians perhaps hoping to make the jump to Europe too soon, even going further in something that sounded closer to a warning.

“If you see what’s going on here, and you can see the bigger picture, what they’re trying to build here, it’s growing,” says de Jong. “It’s something young players should keep an eye on. Don’t go to Europe if you don’t have to. If the level here is good, if the facilities here are good, stay with your family. But I think it’s hard for young players if they have the opportunity to go to Europe.”

Ultimately, for players capable of playing at the very top of the world game, Europe will always be irresistible. But there’s a sense that with MLS becoming more competitive on the eld and through its ability to play gradually improving salaries, the temptation could soon be lessened in the years to come.

Especially if it means playing a few more matches in June, and a whole lot less on rainy Tuesday nights in northern England.