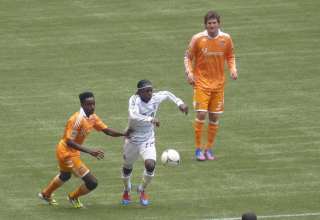 Darren Mattocks may be a rookie, but his finishing in the Vancouver Whitecaps 3-1 win over the Houston Dynamo Sunday evening proved the difference, as he bagged a double.

He started things off with a bang in the fourth minute, smashing a ball past a helpless Tally Hall from close range. Then, on the other side of halftime, the Jamaican struck again, running behind the Houston backline to receive a penetrating ball over the top from Gershon Koffie, which Mattocks coolly slotted home in the 66th minute.

“One thing about him is that he creates chances,” head coach Martin Rennie said of Mattocks following the match. “He scored two today and created four or five, maybe even six chances. If he’s playing then almost every game he’s going to create something. If he’s consistent with his finishing, he could score a lot of goals.”

But it’s more than just his goalscoring. According to his teammates, when Mattocks is on the field, he changes the way the team plays.

“It’s night and day,” goalkeeper Joe Cannon said of how different things are when the 21 year old is on the pitch. “The whole stadium can see it. All of a sudden, a slip up in the back or a missed touch — it’s not only his speed, but he has great jumping ability, he’s a great athlete and he tracks things down. He works hard, he makes the defenders be honest and it’s great.

“It sets the tone and it’s put a lot of pressure on the other guys.”

Those “other guys,” Eric Hassli and Camilo, two key stars from the team last year, watched from the bench, and it had nothing to do with fitness issues.

“It was tactical,” Rennie said of Camilo’s omission. “Just the way we saw the game. If we set up with Davide [Chiumiento] coming short and Darren and Sebastien [Le Toux] going long, we just thought it would work tactically in our favour against Houston — and I think it did.”

Substitute Macoumba Kandji scored a goal in the 83rd minute to get Vancouver sweating, but Jordan Harvey eased those concerns by bagging his team’s third two minutes from time.

“Scoring three goals is always a great thing,” Rennie said. “We saw the first home game of Darren scoring goals. Hopefully we’ll see a lot more of that. That’s him got three goals in two games now. Gershon Koffie to me was absolutely outstanding today. We saw a lot from young players, but everybody played well and we did obviously come up against a very strong team.

“Houston are a top team in MLS and put us under a lot of pressure, especially at the end of the first half and the start of the second half, but one of the signs of improvement is that we stood up to that and came through in the end.”

The Dynamo played without three key players, as Geoff Cameron, Jermaine Taylor and Andrew Hainault were all away on international duty.

“We started off great and then we had a little lull,” Cannon said. “In the second half, we weren’t really sure, and then once we had the second goal we had another period there where we were very confident until their goal. That team, offensively, they had a lot. They had Will Bruin, Brian Ching, and then Cam Weaver and Kandji, as well as Colin Clark on the bench. That team’s good and I think they were missing a couple of guys, and I think that kind of helped, but you have to give us credit.

“We created a lot and started on the front foot and weathered the storm.”

The Whitecaps, now 6-3-4, return to action on Saturday against the Colorado Rapids at BC Place.