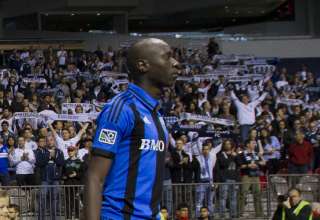 The Montreal Impact finished its initial MLS season with a meagre harvest of nine points on the road. The team returns home after this season’s first two matches on the west coast with six points in pocket, having already matched 2012’s total of a pair of wins on enemy turf.

Last week it defeated Seattle 1-0 and this week downed Portland 2-1 in a robust encounter at JELD-WEN Field.

The host team held possession of the ball for more time than did the visitors and mounted 16 attempts on the enemy goal, twice the number Montreal managed, but was unable to complete its attacks as the Impact defence, anchored by former Timber ‘keeper Troy Perkins, held the Timbers off.

Montreal opened the match with a couple forays into Timbers territory, knocking on the door but failing to open it. Eight minutes in, a Marco Di Vaio pass found midfielder Felipe but the midfielder rolled his shot wide to the right of Portland goalkeeper Donovan Ricketts, traded for Perkins towards the end of the 2012 schedule. Three minutes later the Jamaican national showed that he still had his reflexes, nabbing a Di Vaio header.

The Italian striker came close in the 25th minute, his sliding attempt coming centimetres short of intersecting with Hassoun Camara’s goal-line service but the bulk of the play was directed towards the Montreal end in the opening half with the back line of Jeb Brovsky, Camara, Matteo Ferrari and Alessandro Nesta performing efficiently and coolly under the pressure.

The one-way flow of the game was briefly interrupted in the 30th minute. Playing up on a restart, Ferrari’s little lob pass towards Camara paid off as the French defender’s bicycle kick from just outside the penalty area caught Ricketts flat-footed and found the mesh.

The half finished with the Impact holding a one goal-lead but not without it coming under threat a couple times before the interval whistle blew. A 38th-minute free kick taken by Portland’s Diego Valeri bounced harmlessly off the wall while referee Edvin Jurisevic chose to look the other way when Sanna Nyassi’s emphatic countering of Will Johnson deprived the Canadian flanker of a shot on goal moments later.

Portland undertook the second half with the same pace and energy that it had shown in the opening 45 but it was Montreal who struck first.

Midfielder Andres Romero subbed in for Andrea Pisanu in the 59th minute and made the most of his first touch as a member of the Montreal Impact, his good fortune coinciding with a rare moment of defensive disorganization on the part of the Timbers.

Patrice Bernier, rock solid in his new primarily defensive role in his team’s opener and again this week, drove up the pitch and passed to Romero on the right side. Romero’s lob to Felipe was easily redirected into the Portland goal.

Montreal came within inches of a third goal in the 64th minute of play when Ricketts went wandering, a habit that both excited and infuriated to Montreal fans during his tenure with the Impact, and allowed a Romero shot to get behind him. Fortunately for him, the ball was cleared off the line by defender Michael Harrington.

Midfielder Valeri’s shot from a traffic jam in front of the Montreal goal sailed harmlessly over the goal in the 65th minute while defender Andrew Jean-Baptiste had his try from in close blocked by Perkins, who made five stops on the night.

Giving up late goals cost the Impact numerous points, both at home and on the road last season and was an area the team had to improve upon. One way to do that is to hold larger leads as the game wears down.

Ryan Johnson’s marker in the 80th minute, scored as he slid towards the goal line to redirect a cross from midfielder Ben Zemanski, reignited the crowd but did not change the final outcome as the besieged visiting side held firm in added time with Camara countering Ryan Johnson and Perkins making stops on Will Johnson and Jose Valencia before the final whistle blew.

The Impact’s next two games are at its early season home-next-door-to-home, Olympic Stadium. It hosts Toronto FC next Saturday and New York Red Bulls the week after.