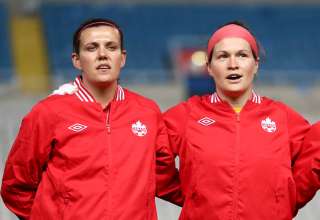 Canada will go into Wednesday’s Cyprus Cup final against England with the confidence of having a perfect record at the tournament. Even though the members of the Canadian national women’s team knew that they’d already qualified for the final before they took the field for Monday’s Group B finale against the Netherlands, they didn’t slip. C

hristine Sinclair’s 145th career international goal was the difference as the Canadians beat the Dutch by a 1-0 scoreline.

Canada finished the group stage with 3-0-0 mark. Erin McLeod, who saved a penalty in the 15th minute, got her fifth consecutive clean sheet.

Despite having Group B wrapped up — and a spot in the final booked — coach John Herdman played a strong lineup with No. 1 keeper McLeod between the sticks, and striker Christine Sinclair supported in attack by Diana Matheson.

Even with the final against England just 48 hours away, the players who will likely be key in that match weren’t rested for the game against the Dutch.

McLeod was named the player of the match. As for the penalty save? “I caught a glimpse of the shooter’s eyes and just held my position as long as possible,” she was quoted on Canada Soccer’s official Twitter feed.

Fans had to follow the match on Twitter or through the various national associations’ websites. While it was easy to find match reports from Canada’s previous opponents — the Swiss and the Finns — the Dutch had very little coverage on Twitter about the game.