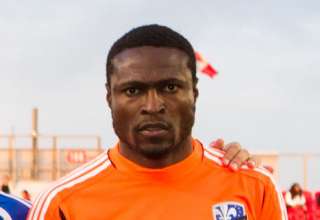 The Montreal Impact went to RFK Stadium Wednesday evening with a single goal in mind according to head coach Jesse Marsch — to come away with more points to its credit than it had when it arrived.

Mission accomplished, as the visitors scored first, allowed the opponents to draw even but, unlike the recent past, hung on to pick up the first MLS road point in team history. The result — a 1-1 draw.

Neither Donovan Ricketts nor his opposite number, Joe Willis, were called upon to make a save in an opening half that gave neither team a clear advantage in play. Possession time and battles won were almost evenly divided as were the few scoring chances that accrued.

The Impact got the first try, a 19th-minute Felipe shot that missed to the left of the D.C. United net. Three minutes later captain Davy Arnaud sent a Justin Mapp pass high and to the right of the mark.

Canadian superstar, Dwayne De Rosario, was closely marked for the most part but showed flashes of his talent when given half a chance. Shortly after the half-hour mark he drove a headed pass from Andy Najar over the Montreal goal. Three minutes later he fed Chris Pontius who watched his shot hit the outer side of the mesh.

Bernardo Corradi was at the origin of the Impact’s final opportunity, coming in the final minute of regulation play. His feed found forward Sanna Nyassi, back in the starting XI this evening, only to have the Ghanaian forward chip his shot over both Willis and the D.C. net.

A livelier second half began with the D.C. squad applying pressure, forcing Ricketts to leave his line in the 49th minute, dashing to the edge of the penalty area to counter the incoming threat. He got to the ball but the Impact was unable to clear their end efficiently afterwards. A scrambling Impact back line managed to keep the ball out of the net more through good fortune than good positioning.

Marsch, who came in for criticism for waiting too long to sub in fresh blood in the team’s game in Dallas on Saturday, brought in Lamar Neagle in the 65th minute, sending him in for Nyassi. There shouldn’t be any second-guessing of the gaffer’s sense of timing in tonight’s match, as only three minutes later the Impact took the lead, Corradi burying a Neagle cross.

Timing of substitutions also paid off for D.C. United coach, Ben Olsen. He brought on former TFC forward Maicon Santos five minutes before Marsch made his move and it paid dividends in the 72nd. De Rosario dribbled the ball in from about 30 metres and crossed to the Brazilian, who put it behind a diving Ricketts to tie things up.

In the 90th minute it appeared that things would end in the same way they did last time out for the Impact, who have been victimized by defensive breakdowns and questionable officiating as often as it has been by the team in contrasting kits, when Santos once again found the mesh but had his efforts discounted on an offside call.

Montreal 10 ten days off coming up, their next game coming at home against Portland on April 28.

THROW-INS – Impact equipment manager Aldo Ricciuti was not at his post for tonight’s game. He was serving a one-game suspension after being ejected from the game against Dallas on Saturday.

• D.C. United has now gone 85 games without registering consecutive victories, a span of time extending back to the 2009 season.

• Impact captain, Davy Arnaud, hit the 20,000 career minutes played milestone this evening. He went into the game 62 minutes short of the mark.