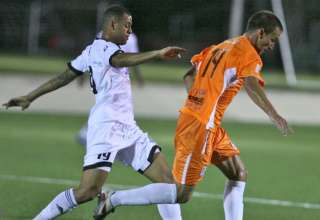 FC Edmonton’s scoreless streak to start the NASL season went past the 270-minute mark, but the Eddies will take a point out of Wednesday’s visit to Puerto Rico.

The Eddies and Islanders played to a 0-0 draw that saw FCE keeper Michal Misiewicz and PRI netminder Richard Martin asked to do very little outside of grabbing crosses and hammering goal kicks.

But, for FCE, which lost the first two of this three-game road trip, a point earned in Puerto Rico was a small victory.

Paul Hamilton, FCE’s general in the heart of the defence, was the star on the evening, as he broke up attack after attack as the Eddies spent much of the second half bunkered down in and around their own penalty area, soaking up the Puerto Rico pressure. Despite Puerto Rico’s attempts to push the ball deep into Edmonton territory, the Islanders created little in terms of threatening scoring chances.

Hamilton’s best work came in the 20th minute, when he rushed back to block a shot from Hector Ramos, who looked like he was going to be able to get behind the FCE backline.

Even though Edmonton had more of the ball in the first half, the closest the Eddies came to troubling Martin was a half-chance from Shaun Saiko, who moved up to play the left forward position in the 4-3-3 due to an injury to Serisay Barthelemy. Throughout the half, FCE’s defenders played long, diagonal balls for Saiko, who battled Canadian right back Edson Edward. Edward, who played 60 minutes, weathered the storm, dealing with almost all of the attacks. He did let one ball get past him, but Saiko found himself at a severe angle and his shot did not trouble Martin.

With Saiko moved from midfield to the the forward slot, Canadian midfielder Kenny Caceros got his first NASL start. And, in an interesting sidebar, Caceros lined up against Edward, his friend and former Ottawa Fury teammate. The two played together not only in the PDL, but all they way down to the U-14 and U-16 ranks in the nation’s capital.

“It was really special to have the chance to play against Eddie,” said Caceros. “It’s been a year since I have seen him and it’s been a few years since we’ve played together. But we have never played against each other before. Eddie is a great player, a strong player, of course he was at the MLS level (with FC Dallas).”

But Caceros was happy with his own performance.

“I felt great,” he said. “It was good to get that first game under my belt. I now know what to expect at this level, and I know I can compete at this level.?

Caceros, who played at Syracuse University, spent last season with Capital City FC of the CSL.

While FC Edmonton wrapped up a two-and-a-half-week road trip, the Eddies actually had a shorter jaunt to the Caribbean than the home team did. FCE played Tampa on the weekend, while Puerto Rico was in San Antonio, beating the Scorpions 4-0 in their’ home opener. The trip back from Texas is considerably longer than the trip from Tampa.

But, with Sunday’s home opener at Clarke Stadium looming, questions will be asked of FCE. Fans will be nervously waiting to see if the Eddies’ can break this season-long scoring drought.

Of course, Chilean forward Yashir Pinto could be available; he wasn’t able to travel with the team because his U.S. immigration paperwork isn’t done yet. But, on Canadian soil, the former Chilean U-20 team member is eligible to go.