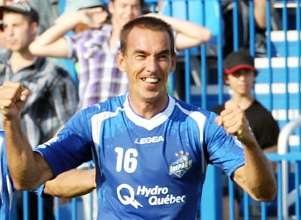 “I’m really happy to accomplish that,” Sebrango said after the match. “I’m glad that I was able to score but it’s more important to get a point.”

The Montreal gaffer threw a modified line-up onto the pitch with Hassoun Camara, as well as recently signed British midfielder, Ian Westlake, starting at midfield but the Silverbacks, perhaps more accustomed to playing in the 33 Cheat and high humidity took control of the game from the outset, their first opportunity coming on a free kick four minutes in and a second at the 10-minute mark, easily handled by Evan Bush, Montreal’s player of the game the last three times out.

Atlanta got the first goal of the afternoon’s Basement Bowl between the bottom last teams on the NASL ladder in the 17th minute, when defender Tyler Ruthven broke down the right side, got past his Impact counterpart, Simon Gatti, and shifted the ball to an oncoming Matt Horth who bounced his shot off the right hand post before it found the mesh behind Bush.

Atlanta threatened again, making Bush earn his keep with spectacular saves in the 35th and again in the 37th minute, finishing the first half with seven shots to the Impact’s pair of attempts.

Montreal, who showed only minor attempts towards the Atlanta goal in the early going — a David Testo drive that failed to find the twine being the only shot up to that point — evened the game in the 42nd minute when Sebrango banged home a right-footer set up by a Mignane Diouf cross, scoring his first since returning to the field four games ago and leaving him only one short of the century mark for his career.

With Montreal maintaining the pressure on the Atlanta goal until the whistle ending the first 45 blew, newcomer Westlake fed a cross to Diouf in front of the net but the striker was unable to convert the pass.

Coming into the second half playing with an energy level unfamiliar to their fans this season, the Impact dominated play with Atlanta only occasionally making it across midfield. Diouf had his second chance of the game in the 52nd minute bit was denied by a diving Jimmy Maurer.

The Silverbacks despite being bottled up in their own end for the bulk of the half, got the only goal and went back into the lead. Making the best of one of Atlanta’s infrequent second-half chances, Horth scored his second of the game in the 64th minute of play, this time assisted by midfielder Raphael Cox.

Switching to a 3-2-5 system with midfielder Marco Terminesi replacing defender Nevio Pizzolitto in the 76th minute paid dividends shortly afterwards for Montreal as Ali Gerba had his shot at a goal. His slow, poorly struck shot rolled wide to the right of the Atlanta net.

Other chances followed as did an unremarked hand ball that got the local fans incensed in the closing minutes but nothing went in until Sebrango got his second, well into added time, heading Anthony Le Gall’s corner into the net to the left keeper Maurer.

The Impact are undefeated in their last five games at Saputo Stadium. It has played eight games since their last victory.

Camara, while satisfied with the result today, said, “There are still some things to be worked out in terms of group cohesion — things that have to become automatisms particularly since we have added some new players. That’s what practice is for — to work on the coach’s game plan so you can put it into effect on game days.”

De Santis spoke about his reservations about the team’s right side and disappointment in Anthony Le Gall and Philippe Billy who have struggled this summer after successful 2010 campaigns, but had nothing but praise for his veteran striker.

“The good news is 38-year-old Eddy Sebrango, playing 94 minutes and getting two goals to make it to 100 in his career.”

The Impact’s next game is on Friday when they visit the NSC Minnesota Stars.

THROW-INS – The Impact took a page from the late Montreal Expos marketing book this afternoon with hotdogs available at a dollar a pop until game time.

•Newly signed midfielder Ian Westlake started the game today and came out in the 60th minute, replaced by Anthony Le Gall. Marco Terminesi, who subbed in for Nevio Pizzolitto in the 76th minute played his first minutes since rejoining the team last week.

•Silverbacks midfielder and leading scorer, Ciaran O’Brien, was named the NASL offensive player of the week, becoming the first Atlanta player to garnish league honours in 2011.

• Impact President Joey Saputo and Executive VP, Richard Legendre announced that the beginning of work on the Saputo Stadium expansion will be delayed until September with the renovations ending in the summer rather than the spring of 2012. The club will play a limited number of games at neighbouring Olympic Stadium to open their first MLS season.