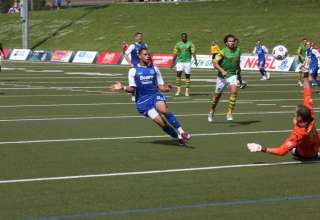 Glaring errors from FC Edmonton were punished by FC Tampa Bay. But, make no mistake, the visitors were full value for a 2-1 win over the Eddies at Foote Field.

Even though Edmonton scored first on a great pass from Ilja Van Leerdam — making his FCE debut after being signed on Wednesday — to Kyle Porter, who chipped the finish over FCTB keeper Jeff Attinella, FCTB dominated the rest of the way.

In fact, FCTB was unlucky not to score more often.

Before he scored to draw the game level, hulking FCTB forward Aaron King forced FCE keeper Rein Baart into a sprawling save, and later struck the post on an audacious volley attempt, as he took advantage of a maheshift Eddies’ backline.

The shuffle at the back was combination of necessity, and a decision by coach Harry Sinkgraven to make a switch at left back. Centre back John Jonke, who was sent off for a clumsy, late challenge on Carolina RailHawks’ midfielder Matt Watson in Wednesday’s draw, began serving a three-game suspension on Sunday. So Chris Kooy, with Van Leerdam playing the same position in central midfield, shuffled to the back — where he was an emergency replacement after Jonke was sent off Wednesday. Alex Surprenant was replaced at left back by Niko Saler, as Surprenant was the goat on Carolina’s opening goal, allowing himself to be nutmegged near the goal line.

Kooy struggled with the much bigger King, and had difficulty tracking back on balls over the top of the backline. Saler gave the ball away that led to the FCTB equalizer.

Saler made a poor pass up the middle which King pounced on; FCE midfielder Dominic Oppong was in position to make the challenge, but wasn’t strong enough on the ball, and King regained possession. With a head of steam, he rumbled towards goal, shrugging off Kooy along the way. On the Canadian football lines at Foote Field, King looked like a tailback shrugging off tacklers. He then got the goal he deserved, smashing the finish by FCE keeper Rein Baart.

At halftime, FCE assistant coach Dave Randall admitted that the club was fortunate to be tied.

After the game, fullback Antonio Rago, said the shuffle shouldn’t be an excuse for the result.

“We play with each other all the time,” he said.

The second half saw FCTB keep the the 1,574 in attendance quiet. And, even though you always felt the winning goal was coming, it came on a series of glaring errors from Baart, who — after being named man of the match against Carolina — again showed off a troubling tendency to make mistakes at key times.

On a simple kick from his area, he put the ball right on the ground, to the feet of FCTB’s Mike Ambersley. The forward dashed towards goal, but Kooy did well to squeeze him out to the left. Running away from goal, Ambersley hit a low roller at goal. But Baart compounded the first mistake, somehow letting the shot slide under him for the goal.

Shaun Saiko had one great chance to equalize; he chested down a ball from sub Chris Lemire, but his overhead-kick attempt was fingertipped over the bar by Attinella.

But, the Saiko and Porter chances were FCE’s only two real threats of the game, while FCTB kept moving forward.

After the big comeback draw against league-leading Carolina Wednesday, FCE was prime for a letdown.

“The character we showed against Carolina, we lacked a lot of today,” said Rago.

THE WRAP: After the game Sinkgraven met with NASL officials to further discuss the three-game suspension to Jonke, with hopes that some kind of appeal would get it reduced.

• Van Leerdam played 61 minutes in his debut, and got a warm round of applause when he left.