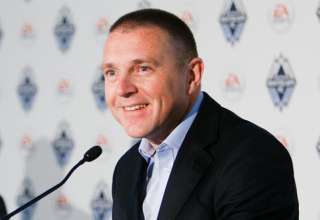 Now, the question will be asked. Was a friendly against Manchester City worth it?

The Vancouver Whitecaps have been forced to postpone Saturday’s night’s scheduled match against Real Salt Lake, after the temporary grass pitch — installed so Manchester City can play on the real stuff for Monday’s friendly — couldn’t hold up to the rain.

The field was declared unplayable.

“We have been working around the clock to do everything in our powers to keep the field as dry as possible,” said Paul Barber, Vancouver Whitecaps FC chief executive officer in a release issued by the club. “Unfortunately, the combination of consistent rain and limited drainage options available for a temporary grass field has left us no other choice but to postpone today’s match. Tickets for today’s game will be valid for the rescheduled match and we will work directly with all ticket holders who are unable to attend the new date. We sincerely apologize for the inconvenience.”

The Whitecaps knew they were taking a risk when they scheduled the friendly with Man City for July 18, just two days after a scheduled MLS match. The grass would need to hold up for two days, and a squad would have to be stretched to play two matches in a 72-hour spell. But the lure of prestigious friendly was too much to ignore.

The club says it is confident the Man City match will be played, as the weather forecast for Sunday and Monday is calling for improved conditions.

But it has to be embarrassing for the club. Real Salt Lake was already in town — and has already paid the expenses for airfare, hotel, travel costs, etc. For RSL, the expense of going to Vancouver for the postponement is the same as if it has played the game.

MLS has never forced a team to forfeit a game — but if there was ever a time that a team could make a case, RSL would have had a legitimate gripe.

RSL confirmed that players were leaving the hotel for Empire Field when they got the news; the coaching staff was already at the pitch. The team confirmed that it arrived in Vancouver Thursday. So, it will have paid out for accommodations and meals over three days already.

Now, both teams have got to find a slot to reschedule the game. And, remember, RSL has already used up one of its scheduled bye weeks to play a game against the Philadelphia Union that was moved because of the CONCACAF Champions League.

And, if Barber is wrong, and the Man City game has to be scrubbed because of a poor pitch… talk about a PR disaster.

But, don’t blame Mother Nature. The Whitecaps rolled the dice by scheduling the friendly so close to an MLS home game, risking a temporary grass field with two games in three days.

And, when does it not rain in Vancouver?