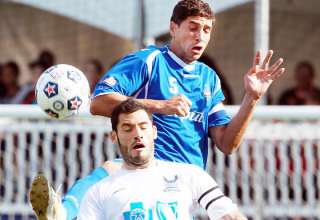 With three games to make up the six points separating them from the sixth-place NSC Minnesota Stars the Montreal Impact did not have any room left for error.

Any loss from today until the end of the schedule would diminish the club’s post-season chances to odds comparable to having a taxpayer approve of a rate hike.

In front of 12,247 fans Sunday, the home side gave head coach Nick De Santis the best possible birthday present, prevailing in a 1-0 decision over the high-flying Carolina RailHawks, who have already clinched first place in the NASL this season and with it a bye for the opening go-round.

Fielding a starting line-up bearing very little resemblance to the player combinations used in yesterday’s practice, Montreal coach de Santis, saw his men take almost complete control of the first half, emerging with a one-goal lead after a play as surprising as the rest of the Impact’s 2011 campaign.

Completely dominating a visiting team that did not start forward Pablo Campos, the RailHawks’ and NASL’s second-leading scorer, Montreal launched 10 shots at the Carolina net in the opening half while the Carolina side managed only a pair.

Chances came in bunches for the home side as they spent the bulk of the first 45 in the opponents’ end. With the most notable and effective combination being the forward pairing of playmaker Mignane Diouf and Miguel Montano who combined repeatedly and accounted for six of the Montreal shots.

Evan Bush met his first challenge in the 16th minute when Carolina mounted a rare attack. Dressed but ineffective for the first half, league scoring leader Etienne Barbara, who potted a pair last time he came to town, was double-teamed by central defenders Nevio Pizzolitto and Hassoun Camara, who never seemed to stray more than a stride from his side.

The Impact captain, who committed the 400th foul of his career this afternoon, denied knowing what brand of mouthwash the frustrated RailHawk uses but did offer that the Impact handled him a lot better than they did last time out.

“Last time we played we lost a lot of one-on-one battles but today our midfield stayed compact and they didn’t get much room when they got the ball,” he said.

Montreal’s goal came in the 40th minute but was not announced until some time had elapsed. Luke Kreamalmeyer’s attempt, seeming as much a cross as a shot, appeared to have been handled, albeit with some difficulty, by RailHawks keeper Brad Knighton, who began the day tied for the league GAA lead with his opposite number.

Referee’s assistant, Dereck Illingsworth, raised his flag after Knighton had cleared the ball from in front of his net, declaring that the ball had slipped behind the Carolina keeper as he tried to get a handle on it.

Neither the keeper nor his gaffer agreed with the call. Referee David Barrie, was harangued by an Carolina assistant coach as he left the pitch for the intermission. The RailHawk staffer was excused for the second half of the game.

Kreamalmeyer, who said he had never scored a similar goal in his pro career, was more than satisfied with the outcome.

“It feels good. I’m glad we got the win. Hopefully we can get the next two and get into the playoffs,” he said before explaining the bizarre play that resulted in his first goal of the year. “I tried to cross the ball and the goalie was out of position. We’ll take the goal and the three points. They’re a good team, they put a lot of pressure on us but we stuck together as a team.”

Playing in a defensive shell as the second 45 got underway, the Impact kept the RailHawks from serious challenges as play got underway. Camara was declared over-aggressive in a 72nd minute tackle on Barbara, who was awarded a free kick from just outside the penalty area but Bush, as he has almost all season, made the clutch save for the Impact.

A minute later a Montreal counter-attack featured Diouf as the triggerman. After commandeering a Montano pass, his point-blank shot was absorbed by Knighton.

Carolina’s last good kick at the can came on a 20-yard free kick in the 86th minute. Last time out the Impact had to settle for a tie game when Bush went one way and the shot went the other. Today Bush merely had to stand his ground and gather in the ball as it approached his midsection, earning yet another shutout and with it, consideration as a repeat defensive player of the week.

Coach De Santis was more than satisfied with his troupe’s effort, saying, “They gave everything to win this match and not just defensively either. We must have created seven or eight chances.”

“Diouf and Miguel (Montano) played an excellent game, as did the whole team. It’s too bad we couldn’t get the second goal to take some of the pressure off the guys. The spirit of the team was unbelievable, their will to fight for every ball and their will to win,” he continued.

“We’ve been creating scoring chances at home for the past month and a half. I think we’ve found the rhythm. There’s a good cohesion and we have good solutions on the bench”

Montreal hosts Edmonton next Saturday in its final home game of the year and closes out the season in Atlanta on September 24th.

THROW-INS: Going into this afternoon’s match Carolina forwards Etienne Barbara (20) and Pablo Campos (11) had an aggregate of 31 goals to show for their efforts so far this season. The Impact’s entire roster had combined for 28.

• Anthony Le Gall began the day leading all Impact players with 30 shots so far this year, good for 21st in the NASL. Team scoring leader, Eduardo Sebrango, and Mignane Diouf were second with 26 attempts each.

• Sebrango (thigh) and Antonio Ribiero (calf) have both been cleared to play while Bill Gaudette (thigh) and Ali Gerba (knee) were still out of uniform.

• Among the fans in attendance this afternoon was 1996 Olympic 4X100M relay gold medalist Bruny Surin, who shared his impressions of play via Twitter as the game unfolded.