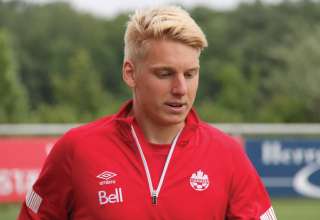 Former two-time Canadian U-17 player of the year Bryce Alderson is headed for Charleston.

On Tuesday, the Vancouver Whitecaps announced that Alderson will join Ben Fisk and Emmanuel Adjetey on loan to the Charleston Battery of the USL. Fisk and Adjetey have been in South Carolina for a couple of weeks.

For Alderson, this move offers a chance to accumulate some needed professional minutes at the Div.-3 level. Alderson didn’t feature at the MLS level last season, despite being on an MLS contract. He played 21 times for the Whitecaps U-18 side, six MLS Reserve League appearances and five more games for the U-23 team.

“Bryce is one of the top young talents in Canadian soccer and he possesses a great deal of potential,” said Martin Rennie, Whitecaps head coach, in a release issued by the club. “At his stage of development it is important to get as much competitive action as possible and we feel that he can benefit from spending time with Charleston Battery, who we have an excellent relationship with.”

The Alderson move also narrows the chance for the Whitecaps to do business with FC Edmonton of the NASL. The Eddies already have Whitecap central defender Carlyle Mitchell on loan.

In late March, before the start of the NASL season, FC Edmonton coach Colin Miller confirmed that the Whitecaps and FCE had been discussing more loan possibilities, but that nothing would come to fruition immediately. (CLICK HERE)

Adjetey had trialed for the Eddies in the off-season.

With Fisk and Alderson out of play, that leaves Canadian striker Caleb Clarke and keeper Simon Thomas as possible loan targets; but, with Lance Parker and John Smits as the clear 1-2 keeper tandem in Edmonton, Thomas really would be unlikely.