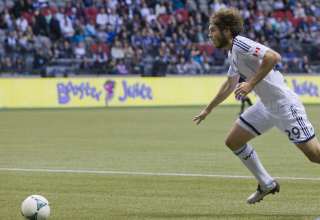 A late goal from Tom Heinemann saved the Vancouver Whitecaps a few blushes Saturday night, as the home side salvaged a 2-2 draw against Western Conference bottom feeders Chivas USA.

For the equalizer, Heinemann smashed home inside the area after Erik Hurtado nodded a header across goal following a Kekuta Manneh cross from the left side.

The goal marked the big St. Louis native’s first MLS goal as a Whitecap (he scored against FC Edmonton in the Amway Canadian Championship), and his first MLS goal since 2011.

“It means a lot,” Heinemann said. “I’m excited to net my first one in front of the home fans. Just an incredible atmosphere to play in, and tonight [the fans] deserved more. But at least we got one [point].”

As for Koffie’s goal, there was an element of fortune on the play, as Chivas goalkeeper Dan Kennedy’s clearance landed right at the Ghanaian’s feet. The player still had a lot to do though, and he reacted well to get off an accurate shot quickly that Kennedy just overran, before failing to readjust.

Despite coming back in admirable fashion, the Whitecaps started extremely poorly, conceding a goal to Erick Torres just three minutes in, as the Mexican scored a spectacular overhead goal.

On the play, Whitecaps defender Andy O’Brien headed a ball straight up, before Torres followed the ball down and scored his acrobatic effort into the top left corner.

“It’s a ball up to Andy, and Andy wins the header, and there’s not a reaction from anybody to go and challenge it,” Whitecaps’ striker Kenny Miller said following the game. “To be completely honest it’s a fantastic finish from the guy, but when that ball goes up in the air it must be up in the air for two, three seconds, but there’s no one about them to challenge for that second ball…it’s a horrendous start, but it’s poor defending… Andy’s went up and won the initial header.

“Someone should be close enough when that ball’s in the air as long as it is, to be at least contesting the ball when it drops.”

Torres followed up his opener by firing Chivas into a 2-0 lead in the 14th minute, as Edgar Mejia walked in from the right with ease before crossing to the forward, who got between O’Brien and Johnny Leveron to head into the bottom left corner.

“We need to get closer,” Whitecaps’ keeper David Ousted said of the second goal. “We’re letting them cross the ball into a dangerous area and not marking up in there and that costs goals.”

The Whitecaps now play three consecutive road matches, and will need to find a way to pick up at least one win and perhaps more if they’re to keep close in the playoff hunt.

“We’ve definitely got the ability to go and do it,” Miller said of getting points on the road. “But it’s not about standing here and talking about it. It’s about going away to Dallas next week, to San Jose after that and to Montreal after that, and actually crossing that white line and perform enough and well enough to go and get the results we need, because…let’s be honest, we’re going to need more than one win.

“We’re going to need a few points to make sure we give ourselves a chance going into those last five games, because this is a hit or miss three game run on the road.”

The Whitecaps next play FC Dallas on the road next weekend, with their record now standing at 10-9-7.