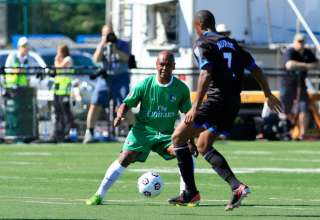 For the first time in either this incarnation or the previous edition of the NASL, the New York Cosmos left Edmonton with at least a point.

A 79th minute free-kick goal from the league’s most profile player, Spanish international Marcos Senna, allowed the Cosmos to salvage a 1-1 draw with FC Edmonton. The goal came after referee Sheena Dickson judged that FCE defender Albert Watson had handled the ball just outside the area. Replays indicated that the ball hit Watson in the FC Edmonton crest on his jersey.

Coach Colin Miller watched the replay as part of our post-game show on Sportsnet. “Shocking decision,” he said as he came up from under the television hood.

What was also troubling was how Senna was able to hit a low free kick into the corner of the goal. The wall didn’t hold, even though a low free kick is always a risk when a player takes the shot from so close to edge of the box. At just 18 yards and a bit away from goal, it’s difficult to get the ball up and down over the wall, so often players choose to hammer the ball low and find holes in the wall.

That’s what Senna did.

The goal cancelled out a 59th-minute goal from Eddies’ midfielder Chris Nurse, who bagged his third goal in three games.

“We just had a lapse of concentration at a critical moment that cost us the game,” said Nurse, who chose to blame the wall, not the call.

Nurse’s goal came after Cosmos keeper Kyle Reynish made an outstanding diving stop to deny Corey Hertzog’s headed effort. Fullback Edson Edward swung in a picture-perfect cross from the right wing, and Hertzog met it at the back post. Reynish dove and punched the ball away. It looked as if it was headed out for a corner, but Eddies midfielder Neil Hlavaty dashed to the ball, kept it in, and pushed the ball back across goal for Nurse to head in to a now open net.

Instead of giving up on the chance after the Reynish save, Hlavaty stuck with the chance and ended up creating the goal.

“I don’t think they (the Cosmos) gave up (on the play),” said Nurse. “Neil’s persistence have us the opportunity.”

“I was playing off of their defender’s shoulder,” said Hlavaty. “And I knew they weren’t going to pick up my run. When the keeper made that save, it fell to my side and I was able to play it back in. There were a lot of black shirts in front of the goal.”

Nurse’s goal opened up a game that had been very tight for almost an hour. Both clubs clogged the midfield, and there was very little space to play the ball in the middle of the park. Ironically, before the goal, Nurse and Hlavaty had pretty well neutralized Senna.

In the first half, there was only one scoring chance of note, a Lance Laing free kick in the 42nd minute that Reynish did well to dive and tip over the bar.

The goal by Senna brought the Cosmos to life. It got another chance right after the goal. Sub Alessandro Noselli got behind the back line, but Parker dashed put of the box to block the effort. The ball bounced off Parker’s chest and into the air. And, without knowing where the ball had gone, Parker smartly shielded Cosmos forward Sebastian Guenzatti from getting past him, as if he was trying to make a block on punt coverage. That gave time for Nurse to clear the ball from danger.

With five games played into the 14-match fall season schedule, the Eddies are now four points behind first-place Carolina.