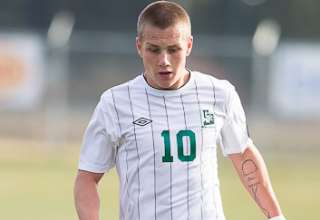 For the second year in a row, The 11 will present weekly wraps and coverage of CIS soccer. Watch for wraps every weekend and other features throughout the season. And, it’s easy to support CIS soccer, with games across the country — and with ticket prices that don’t break the bank.

Fresh off a 10-day trial with the Vancouver Whitecaps (CLICK HERE), Brett Levis began the Canada West season with a bang.

Levis, who also led the Victoria Highlanders to a final-four spot in the PDL over the summer, scored both goals to the lead the University of Saskatchewan Huskies to a 2-1 win over the University of Winnipeg in Saturday’s Canada West curtain-raiser.

With University of British Columbia forward Gagan Dosanjh now signed to a pro deal with FC Edmonton, Levis has become the offensive force to watch in Canadian university soccer. He scored the winner in the 85th minute, but he was a force for the entire match. He launched 10 shots at goal, and five were on frame.

Heck, a lot of times, entire teams don’t get 10 shots in a game.

Levis’s goals, which came in the 78th and 85th minutes, allowed the U of S to recover from a suckerpunch chip-shot opener from Winnipeg’s Ross Pinhammer.

ONTARIO CHAMPS STRUGGLE
The McMaster Marauders are the reigning Ontario champs, but they didn’t get their season off to a great start.

Playing at home in Hamilton, Friday night, the Marauders were stunned 1-0 by Laurier thanks to a penalty-kick winner from Matthew Maughn in second-half stoppage time. The Mississauga. Ont. native made a late-game run into the McMaster penalty area, was brought down, and sealed the deal himself.

On Sunday, on the road at Guelph, things didn’t get much better for McMaster. Marco Gennaccaro scored the opener for the Marauders, but once again McMaster suffered the indignity of giving up a late penalty. This time it was 2011 CIS player of the year Robbie Murphy who converted from the spot with just a minute left on the clock to give Guelph the 1-1 draw.

So, that’s one point out of two games for the defending Ontario champs. Not good.

UBC TROUNCES SFU
As exhibition games go, it was about as big as it can get. The Battle of Vancouver: The University of British Columbia vs. Simon Fraser. On one side, you have UBC, the undefeated national champions. On the other side, SFU, which plays its soccer in the NCAA second tier, and got to the Final Four in 2012.

On the SFU campus, UBC flexed its muscles, with the CIS champs troucing the NCAA-2 Final Four team by a 3-0 count.

For UBC, a favourite to repeat as national champs despite the loss of Dosanjh to FC Edmonton, the win allowed it to set down a marker to the rest of Canada West.

Milad Mehrabi scored the opener, while UBC put the result out of sight with second-half goals from Paul Clerc and Niall Cousens, the six-foot-four forward who was part of the Whitecaps’ U-23 squad this past summer.

WOMEN’S SOCCER: WESTERN’S HOT START
On the women’s side, only Ontario schools kicked off play on Labour Day weekend. And, the most impressive start was enjoyed by Western’s Mustangs.

After two matches, Western’s women’s team is a perfect 2-0-0, and has a nice goal-difference of, well, +8. Not bad for a weekend’s work.

Amanda Boyle and Adrianna Giuffre scored for Western in a 2-0 season opening win over Waterloo, then the Mustangs followed it up with a 6-0 demolition of Windsor.

Lauren Winquist got a hat trick in the win over Windsor, while Boyle scored for the second consecutive match.