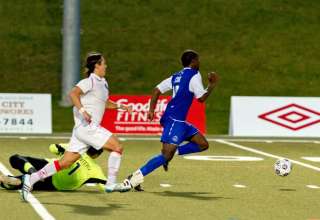 FC Edmonton exploded for three second-half goals after a sluggish first half, and brought its eight-game winless skid to an end with a 3-0 triumph over the last-place Atlanta Silverbacks.

With the win, FCE climbs into a tie for fourth in the NASL standings with NSC Minnesota.

“I came in and stuck to the game plan, worked hard and I got my break,” said Cox.

The game plan, after the first half, didn’t seem to be working all that well. Assistant coach Dave Randall called it “not too bad, not too great.” FCE started the game with five in a packed midfield and Cox alone at the top of the formation. Shaun Saiko was moved to a wide right position rather than playing his usual spot in the middle. But the Eddies had trouble moving the ball to wide locations and couldn’t sustain possession or pressure on the last-place club in NASL.

Cox skipped through a series of defenders before squeezing a shot between two Silverbacks players that Quintero was able to save. Saiko hit a skipping drive from 25 yards out that didn’t trouble the keepers.

But as the second half wore on, FCE began to move the ball along the Foote Field turf, and the chances came.

The first was a great example of a team goal; Cox beat a defender at the touchline and was able to control the bouncing ball. He passed it into the left of the penalty area to Kyle Yamada, who recognized he was being closed down by Atlanta defender William Hunt. Yamada shuffled the ball in his feet, turned and laid it back to Saiko, who knew that Quintero was scrambling to get back into the centre of goal, and simply passed the ball inside of the post and in.

The Silverbacks were a broken team after that; and two massive defensive breakdowns led to goals from Cox, the large target man who’s also quick and good with the ball at his feet.

The first came on a simple one-two passing sequence with midfielder Dominic Oppong. Oppong’s return pass split open the Silverbacks’ back four. Cox was able to dash around Quintero, and slotted the ball into the goal as he was running out of space at the touchline.

The third goal came off a throw-in; the ball went over the Atlanta backline and Cox was away to the races.

“Their goalie came out again,” said Cox. “I caught him with the poke-around and I got into the empty net.”

FCE, which now faces a daunting two-game trip to Puerto Rico, has got its cushion over the seventh-place Montreal Impact to seven points.

Eddy Sidra, who enjoyed two straight solid starts at left back, was left out because of an ankle problem. Alex Surprenant was reintroduced to the starting XI.

Kyle Porter, who came into the game as FC Edmonton’s co-leading scorer with six goals so far this season, started the match on the subs’ bench after being unavailable last week with a slight ankle issue. He came in late in the second half.