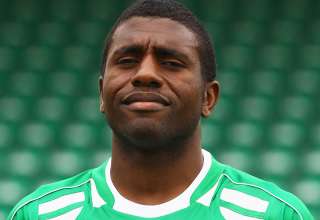 At the Gold Cup, Canada’s strikers were the national team’s weakest links.

So, with the start of World Cup qualifying just weeks away, can national coach Stephen Hart afford not to call Olivier Occean into the squad?

On Friday, Occean had a goal and helped on another as his Bundesliga 2 side, SpVgg Greuther Furth, defeated FC Ingolstadt and former Toronto FC and Los Angeles Galaxy striker Edson Buddle. (Buddle, by the way, came on as a second-half sub in that match).

Occean has three goals in four league matches, and is a major reason why SpVgg Greuther Furth, famous for regular finishes just out of the promotion spots, is leading the second division a few weeks into the campaign.

Occean has always been on the fringes of the national team. His last goal for Canada came in August, 2007, when he pounced on a rebound off a shot from Paul Stalteri in a 1-1 draw with Iceland.

He played 45 minutes in a friendly in Greece this past February. In qualifying for the previous World Cup, he got a total of nine minutes playing time. He wasn’t named to the Gold Cup squad, which could only get goals from Dwayne De Rosario in the tournament — and was eliminated at the group stage.

Hart needs to find strikers who are in form and confident. With Ali Gerba not playing much with the Montreal Impact, it’s unlikely Canada would have him back for the Sept. 2 qualifier against St. Lucia.

Meanwhile, Occean is making more of a case for himself with each passing week.