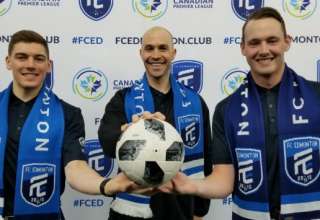 The team will have FCE Academy and University of Alberta product Connor James and MacEwan University grad and former FC Gute keeper Dylon Powley vying to be the team’s No. 1 keeper when the season opens in April. And, overseeing the keepers is Lars Hirschfeld, the former national-team starter who left Edmonton to pursue a career that took him to England, Scotland, Germany, Romania and Norway.

Powley and James are the seventh and eighth players on the FCE roster ahead of the 2019 Canadian Premier League season. Of those eight, seven are Edmontonians.

“(Coach Jeff Paulus) has really put his money where his mouth is,” said James. “He said he was going to build the team using Edmonton players, using academy players, and that’s what he’s done.”

Look for a feature on these signings Friday on the CanPL.ca site.

As some of you already know, I have been contributing longer features to the league’s site. On top of the feature on the Eddies goalkeeping crew, check out:
Sandor: Forge FC’s Zajac ‘takes control of future’ with Canadian Premier League move
FC Edmonton’s Paulus already asking questions of CPL opponents: Can you keep up?
‘Like another planet’: Well-traveled Di Chiara brings wealth of experience to York9
Previously ‘lost’ in U.S. league, Valour’s Skylar Thomas targets national team return