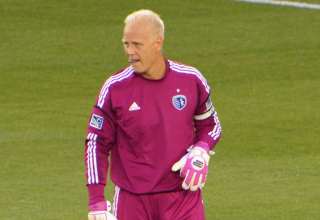 The more things change, the more they stay the same.

With Paul Mariner taking the reins from Aron Winter, beginning the next chapter of Toronto FC’s history, the end result was still a familiar one for the Reds. Poor play at the start of the match and bad luck on the offensive end played a big part of a 2-0 road loss to Sporting Kansas City.

Mariner’s coaching debut saw his team have a very slow start in a much-anticipated switch to a 4-4-2 formation. The new coach abandoned Winter’s 4-3-3 system but the team took some time to adjust in game action despite practising under Mariner for a week.

SKC (9-3-1) attacked from the opening whistle and peppered the Toronto net with attempts at goal. Toronto (1-10-0) eventually settled down after Kansas City scored its first goal, a one-timed effort by C.J. Sapong from a cross by former Red Jacob Peterson. But it was a missed opportunity by TFC’s Eric Avila that could have changed the complexion of the game. He slipped behind SKC’s defence but his shot hit not one, but both posts.

But SKC added another goal five minutes later on a superb volley by Julio Cesar off a corner kick — and that’s all the home team needed to cruise to a comfortable two-goal cushion at the break.

Throughout the match, Mariner was on his feet on the sidelines directing and coaching his players. His players responded with a much better effort in the second half. Toronto had other golden opportunities to get on the board.

In the end Kansas City proved to be too tough of an opposition to overcome.

“Unfortunately it was the same result,” said midfielder Terry Dunfield after the match when asked about playing for Mariner. “There was a fight. The players are playing for one another, for the manager. It just hurts losing, especially in that fashion – concede on a set piece and a cross that should have been stopped – that hurts. Some of these chances we have to kick away.

The defending at times was atrocious, especially early on. Both goals could have been prevented. None of the defenders made any attempt to clear a cross on the first goal, and Doneil Henry was exposed for his inability to cover the backdoor on the second.

Being familiar with Mariner’s coaching style and having played for him in 2010 at Plymouth Argyle in the English Championship, defender Richard Eckersley was back in the lineup.

Despite being injured early and playing out the first half, defender Adrian Cann — who Mariner confirmed had a knee issue — was replaced by Ashtone Morgan to start the second. Then Mariner, who wasn’t happy with his midfield, made a double-substitution in the 62nd minute, bringing in Julian de Guzman for Reggie Lambe and Luis Silva for Eric Avila. Mariner perhaps made his substitutions too early — but luckily for him, none of his players suffered any injuries or otherwise it could have come back to bite him.

Familiar Face
Kansas City’s lineup could have been more deadly but forward Kei Kamara, was away on international duty with Sierra Leone. Peterson filled in admirably against his old team and was a threat all match by delivering accurate crosses.

It was his cross that went untouched across the box in the 18th minute that Sapong buried with his right foot high past TFC keeper Milos Kocic. The goal was Sapong’s fifth of the season.

Toronto was finally able to move forward and create its own chances after the goal. In the 29th minute Ryan Johnson went at three defenders before his cross from the end line to Jeremy Hall was knocked away just in time.

A minute later, Torsten Frings played a perfectly weighted ball over top of the SKC defence where Avila controlled and was one-on-one with keeper Jimmy Nielsen. But his shot hit the left post and it rolled across the goal line and hit the right post before being cleared away. Whether it was bad luck or a poor finish, it encapsulated the TFC season to this point.

In the 35th minute, a corner kick for SKC, Graham Zusi curved the ball into the box perfectly for Julio Cesar who drilled a brilliant right-footed volley into the top of the net. It was a clinical finish for his first goal of the season and Kocic had no chance.

Two minutes later Danny Koevermans had a great chance but his header from cross by Johnson was lacking and Nielsen made the save.

Peterson nearly put the game out of reach and but Kocic got the better of his old teammate by making a big save in the 57th minute. The former Red then made a nasty challenge on Eckersley two minutes later that left the defender on the ground. Peterson came over and said something to Eckersley who screamed back in response to the poor tackle. Ironically, Peterson had to come off later due to an injury of his own.

In the 70th minute, Koevermans broke in past the SKC defence when he took a great through ball from Silva with two defenders closing in on him but his shot was kicked out by Nielsen. It was another missed opportunity by TFC but a great save by the Kansas City keeper.

Toronto will remain on the road for a mid-week tilt against Houston Dynamo Wednesday night before returning home to play New England Revolution next weekend.