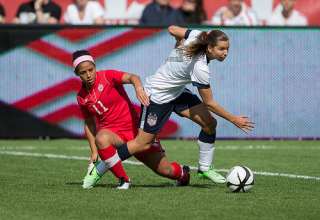 The atmosphere was something special; a sold-out BMO Field was the stage for Canada and the United States’ rematch from the London Olympics.

Despite the record turnout the result was once again a losing one for Canada, as the U.S. took over in the second half and utilized its transition game to score three goals in the final 20 minutes to pick apart the Canadian defence, winning 3-0.

Canada managed to neutralize the Americans’ two stars — Abby Wambach and Alex Morgan — in the first half as the U.S. barely created any opportunities. Canada was not able to create much either but, eventually, the U.S. broke Canada down and that left coach John Herdman disappointed.

“The last 30 minutes of the game really caused us a few problems. The U.S. finally got Morgan released and that was the game plan — to keep Morgan and Wambach quiet,” said Herdman.

“We said that the U.S. will hurt us in transition. They score an average three goals against Canada a game throughout our history and did it again today, so I’m really disappointed to be honest.”

Captain Christine Sinclair was barely able to get free as the U.S. defence kept her from threatening in the match. But the Canadian midfield was also unable to provide her a chance to have any clear attempt at goal. But Sinclair did not focus on her performance and took positives at keeping the U.S. off the scoresheet for most of the match.

“Obviously we lost 3-0 but I thought for 70 minutes we really didn’t give them many chances, especially that first half they literally created nothing against us,” said Sinclair. “I think that’s the first time we shut them out like that but they got three breakaways on transition and buried them. So we got about 20 minutes (to go), we got to close the gap a little bit more.”

It looked as though the U.S. went throught the motions in the first half to see what kind of game Canada would play. But, in the second half, the Americans suddenly flicked the switch and began to pick apart the Canadian midfield and defence — applying constant pressure and hemming the ball in the Canadian side of half. But both goals did not come from pressure, but rather from great passes up from midfield in transition.

The change started with a couple of headers by Wambach early in the second half. In the 54th minute she put a free header from the right to far side of goal but a Canadian defender cleared it off the line. A minute later, off another corner, Wambach put a diving glancing header low towards goal but 17-year old Kadeisha Buchanan made a terrific block on what looked to be a sure goal.

From there the U.S. kept up the pressure and came close on numerous occasions.

In the 70th minute, Wambach found Morgan with a great pass to the left flank. Morgan then collected the ball and turned defender Emily Zurrer inside out as if she were a practice pylon and then beat keeper Erin McLeod with a right-footed shot into the bottom right corner to make it 1-0.

Then, in a near carbon copy of he first goal, Morgan did it again. Once again open on the left side, she received a great long pass through two Canadian defenders and ran in untouched towards goal. Desiree Scott and Buchanan tried in vain to get back and collapse, but Morgan cooly placed another right-footer past McLeod just inside the far post.

Morgan showed exactly why she is one of the top female soccer players in the world. McLeod simply did not have any chance with either clinical finish from the U.S. striker.

Canada nearly pulled one back in the 90th minute, as substitute Kaylyn Kyle pushed towards goal and put a nice pass to her right to a wide open Tiffany Cameron, who had also come off the bench. Cameron struck the ball awkwardly and it went wide of the goal into the stands.

Then, in extra time, the U.S. picked apart the Canadian defence again. A wonderful ball was played ahead to Sydney Leroux. She then rounded McLeod to easily knock the ball into the gaping net to make it 3-0.

Then, in celebration, she grabbed the U.S. crest on her jersey, pointing to it and then shushed the crowd with her finger. The crowd reacted negatively to the celebration and booed her. The fact that Leroux, a former Canadian youth player, had chosen to play for the United States didn’t sit well with the fans in Toronto — and they let her know about it the whole game long. Leroux responded with a celebration in to rub it in after the 90th minute.

But, as the final whistle blew, the Canadian team was given an ovation as it left the pitch.

Herdman was blunt of his assessment of the match afterwards and thought that Canada’s play took a dip as he started to make substitutions and as players began to fatigue.

“You got some challenges when big players come off the pitch for Canada,” said Herdman. “We just can’t afford to do that and hopefully over the next two years I can find some players that when they do come off we can replace them.

“And find the same sort of effect that Sydney Leroux does for the USA. You look at it Leroux gets one shot, one opportunity. Tiffany Cameron gets one shot, one opportunity. One ends in the back of the net and the other one ends up in the stand. That’s where we’re at at the minute but we got to work with that and take it forward. We can’t hide from it.”

Buchanan vs. Wambach
Herdman had more praise for Buchanan who made her debut for the senior national team and acquitted herself extremely well. She didn’t seem fazed one bit going up against the best team in the world and best player in Wambach in front of a sold-out stadium. The coach picked Buchanan as Canada’s player of the match.

“I thought young Buchanan did an unbelievable job with that today,” said Herdman.

“She’s unbelievable. She owned Abby Wambach today. Sorry Abby. But a 17-year old kid has come out there and did an unbelievable job. I’m proud of her. She’s shined a light today for any kid in this country to say no matter what background you’re from you can play in front of 23,000 and play like that – wow. And that’s available to any kid who wants to work and go through the things she’s gone through to get there.”

Buchanan even drew praise from Wambach.

“She’s great,” said Wambach. “I got a bruise on my foot to prove it. She played me tough today. She’s pretty young, 17 I think, I think that just proves how the progression of Canadian soccer will go.”

As for Wambach’s bruise, the soft-spoken Buchanan simply replied, “Knock for a knock. It’s pretty good. A good battle.”

“Felt pretty good, felt tiring. She put up a physical battle but I think I did pretty good.”

The crowd of 22,543 that was, as expected, very loud and decked out in red and white. The Voyageurs supporters in the South even end got on U.S. goalkeeper Nicole Barnhart every time she picked up the ball. They counted out loud when she did. This was in retaliation, of course, to what Wambach did in the semifinal against Canada in the London Olympics — earning a controversial free kick for time wasting that led to an infamous late penalty. The fans did not forget .

“It was unbelievable,” said Herdman of the crowd. “There should have been 20 free kicks,” he said jokingly, “bring back the Norwegian referee. We’d been in heaven today. Great atmosphere.”