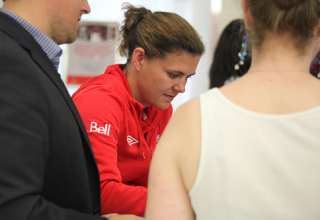 Ten months ago, the Canadian and the United States’ national teams played in what was arguably the most exciting match in women’s soccer history. In the Olympic soccer semifinal, the red and white, no matter how resilient, came up short in extra time.

Especially tough to overcome was the controversy of a referee’s decision that put the U.S. level with a few minutes remaining. The drama of a heart-wrenching but inspiring loss is still fresh today for the Canadians but also its fans. Canadians were so captivated as to what transpired in London last August that the women’s national team has suddenly found itself with a country filled of supporters and a full house on home turf. Over 20,000 fans are expected at BMO Field on Sunday afternoon as the two countries meet for the first time since the semi final.

There’s no doubt about it – this is new territory for the women’s program. All this attention has some of them feeling like celebrities and a little overwhelmed by all the attention.

“We get reminded about it every time we bump into people in airports. People won’t leave it alone – it’s unreal,” said national coach John Herdman after a spirited practice in front of a few hundred fans on Thursday night.

“They’re not used to this. In the Olympics you maybe have a couple of hundred Canadians showing up but we didn’t see any of this. So turning up on Sunday it’s going to be interesting to see how we cope.”

Captain and national hero Christine Sinclair can’t even grab a coffee in the city without being stopped on the streets.

“Absolutely, this would have never happened before the Olympics,” said Sinclair. “Being here in Toronto, we walk down the street you can’t even go to Starbucks without people recognizing you. So life has changed for a lot of us… It’s our fist time to sort of share that with our fans.

“It’s still shocking. It’s our first time back home since the Olympics, and it is surprising. We’ve never experienced this in Canada before.”

Herdman not only believes that the success of the Olympics that has catapulted the team into the national spotlight but also how the events unfolded. .

“The emotion was very raw when we came back into camp and it still hurts a bit,” said Herdman. “But those moments, those decisions, that game connected the country and I’m sure if it hadn’t gone that way we wouldn’t have had the same support we have now. If went on to win the gold medal it wouldn’t be the same as winning the bronze the way things happened.”

Now with the “rematch” set Canada as always will be in tough against the top-ranked team in the world, but Herdman is hoping the home field advantage could play a factor.

“It’s our first game since the Olympics and we’re in Canada, in Toronto in front of a sold-out crowd… you see what these girls mean to this country and if this energy doesn’t drive you to another level of performance then I don’t know what will. It’s going to be tough for the girls.

“It will be a great learning experience and hell of a test — the U.S. is 35 games unbeaten. We got a tough record against them so it (crowd) might just push us over the line.”

But Sinclair doesn’t believe that emotions will be running any higher than normal against the US.

“Our games against the Americans before the Olympics, during the Olympics, after the Olympics – it’s always emotional. It’s a rivalry. They’re the best team in the world. If you can’t get amped for that game you can’t be playing sport.”