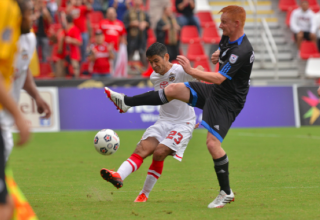 History was made Sunday in the modern NASL, as, for the first time, two Canadian head coaches squared off head-to-head in a league match.

And, after a lightning delay it was Alen Marcina, the San Antonio Scorpions’ interim boss, who could claim the win over FC Edmonton’s Colin Miller.

Polish striker Tomasz Zahorski scored near the stroke of halftime to give the home side all the offence it would need on a rain-drenched Toyota Field pitch.

With the New York Cosmos’s 4-0 win over Carolina Saturday, the Eddies were mathematically eliminated from being able to grab top spot in the fall season. The Eddies went into the match knowing that the only hope they’d have to stay in the Soccer Bowl race was infinitely small: a)To beat San Antonio and then win out b) Hope the Cosmos would go on to lose its last three remaining games, while Atlanta would go on to win its last three; that would allow Atlanta to take the fall title, and then the Soccer Bowl opposition would be the team with the best combined spring/fall record in the league.

But, with the loss, FCE can no longer claim the best combined record in NASL, either.

The goal came in the 40th minute. Scorpions midfielder Javier Saavedra stripped Eddies’ left winger Massimo Mirabelli of the ball, then pushed a low cross to the near post. Zahorski flicked it with the outside of his boot and the ball went into the top corner of the goal.

Mirabelli had earlier taken a blow to the head from San Antonio fullback Lyle Martin. And, just minutes after the giveaway, he was taken out of the game, replaced by forward Anthony Adur.

“It was a horrendous giveaway five to six minutes before the end of the half,” said Miller. “Really, it summed up how sloppy we were through the first half. But I thought the team responded very well in the second half. We closed them down much quicker and we were a lot more lively. We the things that we worked on in training. I believe we deserved at least a draw, to be honest. I’m very disappointed with the result.”

Zahorski had a chance to make it 2-0 before the break. He beat defender Mallan Roberts to the near post and got to a low centering attempt from Martin. But keeper Lance Parker hugged the post, hockey-goalie style, and kept the ball out.

Parker also made a good stop earlier in the match, in the 17th minute. San Antonio got a break off a quick free kick. , Dennis Chin and Sainey Touray, two players who were just brought in from the USL, combined. Chin slipped the ball to an unmarked Touray in the box, but Parker came out and took away the angle.

FCE had one decent chance in the first, a rising shot from the outside of Corey Hertzog’s boot that forced Scorpions’ keeper Jeremy Vuolo to stretch to make a save. But, as Miller said, the Eddies’ performance in the first half won’t go down as one of their best.

FCE had two great chances to equalize in the second half but, in both cases, neither player was able to get a shot off. Edson Edward made a nice pass that sprung Neil Hlavaty in the box, but Saavedra was able to make a late lunge on the wet turf and cleanly took the ball off the attacker’s foot.

And, just after Edward got a straight red for an ill-timed diving challenge on former Toronto FC draft pick Pat Phelan, Daryl Fordyce looked like he had got behind the line and was bearing down on Vuolo in the Scorpions goal. But, former Montreal Impact defender Stephen DeRoux got back to make another perfectly timed last-ditch challenge.

In the 89th minute, play was halted because of lightning. Both teams waited out 30 minutes so they could contest the final minute plus three minutes of added time, as Santos Laguna supporters fans impatiently waited for the second half of the doubleheader — between their squad and Club Tijuana — to get underway. The Eddies did threaten one more time; off a scrambled free kick into the box, Phelan was able to head the ball off the line and out of danger.

The weather wasn’t an issue for the Eddies.

“The pitch was fine,” said Miller. “It was fine to play on. No complaint about at all the weather. It was a steady rain, not really a heavy rain, and it’s actually great weather to play in.”

Now, the Eddies will head to New York next week to face the Cosmos, only one point ahead of last-place San Antonio.

“It’s a battle between San Antonio and us for the wooden spoon, and we’ll head down to New York knowing that this was a team that we should have beaten at home, that only got the draw with us because of a horrible referee’s decision.”