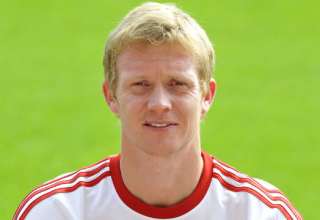 Barry Robson is here, and he’s here to work.

That was the message from the Vancouver Whitecaps latest Designated Player signing at his official introduction Monday morning at BC Place, as he insisted he isn’t expecting to walk into a side sitting in third place in the MLS Western Conference.

“I like to think I give 110 per cent,” Robson told reporters following a press conference. “That’s what I’ve built my life and career on. Those are principles you need to have in football. I’m not going to be brilliant every game, you’re not going to stand out every game but I can give you 110 perc ent and that’s all you can expect from any player.

“That’s what I’ve always built myself on and that’s what the players I’ve played with have expected. That’s what I expect from myself and I’m sure that what the coaches and managers and every single supporter expects. As long as you’re doing that, if you’re playing well, great, if not, as long as you’re giving everything there’s not much you can do.”

Robson joins Vancouver from English second-tier side Middlesbrough on a three-year deal. He’s fresh off the disappointment of missing out of the promotion playoffs for the English Premier League, as Boro finished in seventh place with 70 points, five back of the final playoff spot, which was claimed by Cardiff City.

He had a strong season individually though, captaining the side for spells and scored seven goals from midfield.

After playing 36 league matches this season, the 33-year-old Scot said he’s been resting for seven weeks without doing much physical work, so will need to build himself back to full fitness before the July 4 away game against the Colorado Rapids, when he will be available for selection for the first time.

“It will take a little time to get used to his surroundings,” head coach Martin Rennie said.
“He’s got a few weeks to train, he has to get up to full fitness just like everybody else will. Anybody in that situation would be in the same boat so we give him plenty of time to get settled in and get used to being here, but we look forward to having him as a big contributor to our team as we go into the second third of our season, the second half of our season, and look forward to doing well not just this season, but in the future.”

Part of that settling in process for the midfielder is all the basics – he said his wife traveled ahead of him to pick a house and find schools for his children.

“I’ve got three children which is the most important thing,” Robson said. “That’s the biggest worry for me and how they’re going to settle. They’ve traveled about in Britain a lot, so I’m sure they’ll be fine.”

Despite his pedigree – Robson has played internationally 17 times for his country and played in the final 16 of the Champions League with Scottish side Celtic — the versatile midfielder repeated on a number of occasions his respect for his teammates and the quality of Major League Soccer.