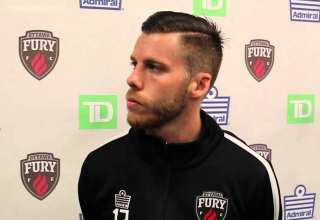 This week, the NASL enters our weekly ranking of who is getting minutes in the top two divisions in North America.

And, in one week, three NASL teams — Ottawa, FC Edmonton and Atlanta — are at a better minutes-per-game average than any MLS team. Because the NASL season is shorter than MLS, we’ve instituted a new ranking system for the teams, which orders the clubs by the minutes given to Canadians on a per-game basis.

The Ottawa Fury now tops the charts, with a 241-minutes-per game average (from the errors and omissions dept: We forgot to include Frank Jonke and Patryk Misik in the original draft of this article). Canadian Carl Haworth got 90 minutes in against Carolina, but he’ll rue the penalty he had saved by RailHawks keeper Hunter Gilstrap. Off that save, the RailHawks broke down the field and earned a penalty of their own, with Nacho Novo scoring the goal. In that same game, Julian de Guzman, playing his first-ever NASL game, got 90 minutes in after he was sent off for placing his hands on the match official.

While some of the numbers may seem large, remember that, just to have three Canadians out of 11 seeing regular playing time, you’d need to see per-game minute averages of 180-270 minutes (translating to 60-90 minutes per game for three Canadian players).

In both NASL and MLS, roster rules treat Canadians as foreigners on American clubs, while Americans are domestics on Canadian clubs. With those skewed rules, you have to give an “honorary Canadian” nod to any American club that ranks ahead of the Canadian clubs when it comes to giving our players the chances to play. So, Atlanta, you might have lost your hockey team, but the Silverbacks, at least very early on, are giving Canadians more minutes, on average, than Toronto FC or Vancouver or the Montreal Impact.

(Quirk of Canadian English; we spell it “honour” and “honourable,” but drop the u when we spell “honorary”)

And, because USL does recognize Canadians as domestics league-wide, and the Canadian Soccer Association has roster quotas on place which compels the three USL sides north of the border to have more than 50 per cent Can-con on the field, it’s not fair to include that league’s teams in this study. It’s simply not apple to apples.