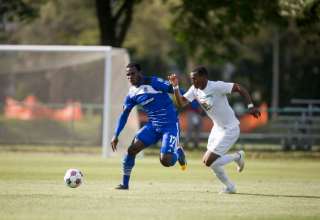 Lance Laing in preseason action against the Tampa Bay Rowdies.

Lance Laing has a made a promise: It won’t happen again.

And what is the “it” to which the FC Edmonton left winger is referring? It’s what happened in the first half of Saturday’s NASL season opener in Jacksonville. The Eddies gave up three goals in the half, including a strike just 12 seconds after the opening kickoff. The Eddies lost the opener 3-1, and the team is back in Edmonton, prepping for Sunday’s home opener against the Carolina RailHawks.

“We know we are better than what we displayed,” Laing said after the Eddies wrapped up training Tuesday at Clarke Stadium, in 0 C temperatures that aren’t close to what the team experienced during its recently concluded trip to Florida. “That was the worst start to a game I’ve ever had with this team; I don’t remember ever giving up three goals in a half like that while I played for (coach) Colin Miller.

“I think it was something weird. And it won’t happen again. I will guarantee that to any media.”

Will Carolina be the tonic for the Eddies? In 2014, the RailHawks were FC Edmonton’s whipping boys; in two visits to Clarke Stadium, the RailHawks were outscored 9-1 (of course, both of them lopsided wins for the Eddies). The RailHawks have made some changes in the off-season, including the signings of former Eddies Neil Hlavaty and Chris Nurse, though the latter has been away with the Guyanese national team.

Laing doesn’t think a lot from last year’s results can be applied to Sunday’s game.

“There’s a lot of new players coming into the picture; for us, it’s about gelling and getting everyone in tune with each other.”

Speaking to the media after the frosty training session, Miller said one bright spot from Saturday’s 3-1 loss to Jacksonville was the play of right back Eddie Edward. He said the Canadian fullback man-marked as well as he’d seen at “NASL or MLS” level.

Edward, like Laing, said that it’s hard to judge this version of the RailHawks by the 2014 side that struggled so mightily against the Eddies.

“It’s a new season, new mindset; it’s not like they are exactly the same team, either.”

He said the Eddies are hungry to show that Saturday’s loss wasn’t a fair representation of the kind of team Edmonton soccer supporters will see this season. But he stopped short of saying that the Eddies will come out wearing their emotions on their sleeves on Sunday.

“I don’t know about coming out angry, because we have to be careful about cards. But the thing about this team is that every time we step on the pitch, we want to prove a point.”
And, after Saturday’s loss, there’s a lot of messages this team needs to send in the home opener.

As of Tuesday, Environment Canada’s seven-day forecast calls for a high of 10 C and a low of -1 C for Sunday’s game. But sunny conditions are expected.