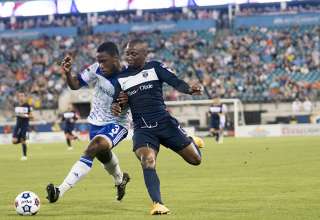 FCE's Eddie Edward in action vs. the Armada. PHOTO: NASL

FC Edmonton spent three weeks in Florida so the team would be as ready as can be for Saturday’s season opener at Jacksonville.

But, the Eddies were down by three goals at halftime — one for every week spent in Florida. The Eddies were like deer caught in the headlights off the opening kickoff, as the expansion Armada — playing its first-ever league game — set a new NASL record for the fastest goal from the opening kickoff. Jemal Johnson’s swerving drive from outside the box hit the back of the Eddies’ net just 12 seconds in.

The Eddies recovered in the second half, but couldn’t do enough to erase the big Jacksonville lead, losing 3-1.

Keeper Matt VanOekel, who made the move from Minnesota United in the off-season and got the nod over Golden Glove winner John Smits, could only watch, flat-footed, as Johnson’s shot screwballer off the outside of his foot and into the top corner.

VanOekel would make a habit out of picking the ball out of the back of his net.

Late in the second half, Armada speedster Alhassane Keita pounced on a loose ball after Eddies’ centre back Mallan Roberts couldn’t control it cleanly. He sprinted up the field and hist shot found the corner of the goal.

The Eddies were reeling heading into halftime, but the Armada wasn’t done; Marcos Flores eluded the marking of Johann Smith — who was selected over Kareem Moses to start at left back — and headed home the third just before the halftime whistle was blown.

“We had a very disappointing start; in the first half, we looked like an unorganized group of players,” said FCE coach Colin Miller. “And that’s usually something we take great pride in. At the opening kickoff, we were talking about how are we going to win the ball back, and then, sure, it’s a great shot, but it was criminal defending on our part. Then, the second goal, we can’t clear our lines. On the third goal, that was U-9 or U-10 defending.”

Moses replaced Smith at halftime; Miller confirmed that the change was tactical.

Smith, the former Toronto FC player, struggled to find any link-up play with Lance Laing on the left wing.

You can think maybe, just maybe, things would have been different had referee Marcos De Oliveira decided to send off Armada centre back Fabricio Ortiz in the fifth minute. FCE striker Frank Jonke had got behind Ortiz, chasing a bouncing ball in the area. Ortiz hauled Jonke down, but got a yellow instead of a red — even though Jonke would have been alone if he had got to the ball.

But, when a team is as poor as the Eddies were in the first half, it’s hard to cry about a call. The truth is, the Eddies allowed the Armada to look Barcelona-like.

Just four minutes into the second half, Johnson forced VanOekel into a diving stop; but then the skies opened and a downpour sent many of the 16,164 in attendance scurrying to find shelter. That number represented a new NASL attendance record, breaking the record set by the Ottawa Fury in its 2014 TD Place opener.

As the rain fell, the Eddies found life; Ritchie Jones scampered down the right wing and managed to slam an attempt into the short side of the goal to cut the lead to two; and, defensively, bringing in Moses helped shore up the back line — and the central defenders had a better time coping with the Armada’s speed.

In the 85th minute, the Eddies had a glorious chance to cut the deficit to one goal. But fullback Eddie Edward, up to join the attack, poked his shot wide after a great cross from Laing.

Miller said he was happy with the team’s response in the second half; but he said the Eddies have to stop a troubling trend that began in preseason; and that’s poor performances early in games.

Still, the team’s poor first-half performance will give their coach a lot to think about in terms of drawing up a starting XI for next Sunday’s home opener against the Carolina RailHawks.

“We’ll have a week of training to look at things; certainly, a lot of players did not do themselves any favours tonight. But we have to remember that there are 29 games to go, there’s no need to panic.”

And Miller wouldn’t criticize the work of VanOekel in goal.

“I am sure he is disappointed with this result, but as the season goes on he is going to keep us in more games than he’s going to get beat.”

Miller went with a starting lineup that emphasized pace; he went with Smith, a speedster, at left back. Much-talked-about Icelandic right-sided midfielder, Oskar Orn Hauksson, started on the bench, with the speedier Sainey Nyassi getting the call to go on the right side.

Strikers Daryl Fordyce and Tomi Ameobi started on the bench, with Jonke — who didn’t score an NASL goal last season but had an excellent training camp — getting the start. Fordyce and Canadian striker Sadi Jalali came in as second-half subs.