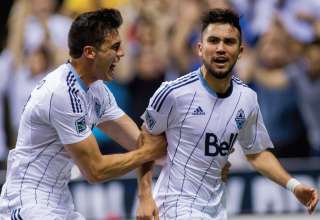 Pedro Morales, named MLS Newcomer of the Year, is congratulated by Omar Salgado (left), who is no longer with the club. PHOTO: BOB FRID/CANADA SOCCER

The Vancouver Whitecaps got to the playoffs in Carl Robinson’s first season as head coach. But, to do better than another first-round playoff exit in 2015, the team needs more scoring and defensive depth. And the team needs to address its needs while only being able to guesstimate what the salary cap will be after a new Collective Bargaining Agreement is signed…

When Carl Robinson joined Toronto FC back in January 2007, he hoped to bring success to Canada’s first Major League Soccer franchise. He would spend three seasons in Toronto.

However, that club has struggled mightily on the field since joining the league, and five seasons after Robinson was traded, still doesn’t have a playoff appearance to show for itself.

So, for Robinson, it’s a bit unusual to look back on Toronto’s season, after a 2014 campaign in which he guided the Vancouver Whitecaps to the playoffs in his debut season as an MLS coach.

Meanwhile, his old team once again failed to meet expectations, despite the big-money additions of Designated Players Jermain Defoe and Michael Bradley.

“Toronto’s a fantastic club,” Robinson says over the phone, shortly before he embarks on a South American scouting trip. “Unfortunately it’s eight years now they haven’t made the playoffs. I still have a lot of friends there, and they still talk about the same things that they did when I was there five years ago.

“It’s unfortunate for them, but I hope they manage to sort it out and get the right people in charge to get them to playoffs, because they have some good fans and they deserve playoffs. It doesn’t happen overnight.”

A change for the better certainly doesn’t happen overnight for any club, but in Vancouver the progress made under Robinson has been rapid. After a disappointing 2013 season highlighted by a disastrous run in which ensured the team didn’t make the playoffs, the club sacked then-head coach Martin Rennie.

Robinson wasn’t the first choice, as the ‘Caps pursued former U.S. international manager Bob Bradley and also had discussions with Frank Yallop, who opted to not wait on the Whitecaps and accepted a position with the Chicago Fire. But given 2014’s success, which has seen a return to the playoffs and the club qualifying for the CONCACAF Champions League for the first time, Robinson certainly isn’t making the Whitecaps brass think about what might have been.

“If Bradley had said ‘yes, I’d love the job,’ then he would have had the job,” Whitecaps president Bob Lenarduzzi says from his downtown Vancouver office, overlooking Burrard Inlet. “When he didn’t, we looked at the other candidates that we had and determined Carl was the guy… ultimately he was our choice.

“We knew he was a great communicator and, for me, that’s one of the most important qualities in a coach, is that you’re prepared to talk to players, talk to staff – how do you communicate with media? He’s done a wonderful job of it, and as a result I’m not surprised that we’ve had the season we’ve had.

“With the peaks and the valleys we’ve had throughout the decision, he will have learned from those situations and be an even better coach next year.”

But as Robinson enters his second season as coach, he does so with a number of unique challenges.

He’s built a good footballing side anchored by a strong midfield bossed by Designated Players Pedro Morales and Matias Laba.

But the club will have to go out and acquire at least one top-tier forward, and perhaps another complementary attacking player to bolster its offensive options. For as good as the ‘Caps were in 2014, when it came to putting the ball in the back of the net, there’s plenty of room to improve.

With just 42 goals last season, Vancouver was the lowest scoring side to make the playoffs, and the third-lowest scoring team in the Western Conference. The team is also sniffing around for another centre back. New Costa Rican arrival Kendall Waston established himself as a starter by season’s end, but a decision still needs to be made on hispartner Andy O’Brien, who is coming off an excellent season, but at age 35 can’t be relied on to carry the load of a full season plus CONCACAF Champions League duty.

But while both Lenarduzzi and Robinson acknowledge acquisitions need to be made to ensure the team has the depth to compete in both MLS play and the Champions League next season – a process both seem confident is achievable – that challenge comes with the added complexity of a new Collective Bargaining Agreement, which has yet to be finalized between the league and its players.

League revenues continue to grow, and the expectation is that that the salary cap will go up — it’s just a matter of how much.

So in that regard there is a relative predictability to the situation, as long as the Whitecaps don’t overestimate what sort of room they’ll have to work with.

“It does, very much so,” Robinson replies when I ask if the CBA situation complicates acquiring new players. He says the club has been mindful of its implications. “The worst-case scenario is that the salary cap rises five per cent, that’s it. We’re in a position, that if it does rise five per cent, we’re fine. A lot of other clubs depend on the allocation money that they have… we’re in a position that we’re comfortable if it goes up by the standard increase.”

Robinson adds that if the cap goes up more significantly, that just increases the club’s options.

“It will be a challenge, but it’s one that we’ll deal with,” Robinson said. “I won’t make any excuses about it. There’ll be periods where we have to play away for maybe a month, five or six weeks, but then we get extra home games at certain periods. If we concentrate on our business at home, and manage to pick up results at certain times during the season, we’ll be fine.”