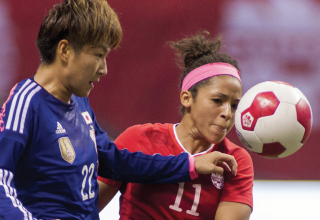 In the Thor comic books, the Destroyer is a doomsday machine. It’s a giant metal monster, powered by magic, that is indestructible and unleashes rays of pure explosive power. Canadian midfielder Desiree Scott has earned “Destroyer” as a nickname because of her aggressive nature. She will be a big part of Canada’s national team at the upcoming Women’s World Cup. In 2014, she decided to leave NWSL’s Kansas City FC for a new challenge — to play in England’s WSL. She started 20 games for Notts County. In this interview, she talks about Canada’s readiness for the 2015 Women’s World Cup, and talks about her experiences playing in England — and how the game there compares to how it’s being played at the elite levels in North America.

PP: How do you feel about your season spent with Notts County?

DS: I really enjoyed it. I went into it sort of blind, not really knowing what to expect. I just wanted to get out of my comfort zone, to try something new. I was pleasantly surprised by the quality of play, the physicality of it. I had a great group of players around me.

PP: How does the English game compare to the quality of play in the NWSL?

DS: I think the difference over in England is the amount of, well, we have part-time and full-time players. For example, when I was in Kansas City, we were training every day with a full squad; versus in England, the part-time players were only there twice a week. When you are playing with some of the best players in the world, day in and day out, that really helps add to the calibre of play in the league. But, for me, it definitely wasn’t a walk in the park. It was physical. I’m usually the one destroying people and I was the one getting big-time tackles in. I think it’s one of the most competitive leagues they have ever had over there. I think it’s on the rise, but there’s still improvements to be made for sure.

PP: But it must be special, in England, to see the women’s teams affiliated with the longstanding soccer clubs…

DS: You go over there, and it’s just a soccer culture. My first game was against Arsenal, and those are the teams you see on in Champions League and every day on TV. I think it’s great for women’s football to be affiliated with a men’s club of such a calibre and to be a part of that. Hopefully, the women’s game over there will continue to improve and rise and enjoy more popularity, as well.

PP: Will you return to England?

DS: I really enjoyed it. Right now, my focus is on the World Cup. I will be full-time with the national-team leading up to that. But, after the World Cup, the options are open. But I did really enjoy it in England and, yes, I would go back. Right now, the plan is to be with the national team, full-time. We are devoted to World Cup prep; and hopefully to raise that trophy on July 5th. I will decide what to do (professionally) after that.

PP: What are the biggest improvements that the Canadian national team has to make heading into 2015?

DS: We’re lucky that we get to spend these next eight months together as team, working on the little details. I think we have all the foundations there, the different formations. We know our opponents well. But, now, it’s got to be about beating them. We need a result against these top-tier teams, particularly the last 20 minutes of games is what is really getting us. We battle, we fight it out, but teams are scoring on us in those last minutes of the games. It’s about finding that mental switch, what can we do to change and battle it out for the full 90 minutes? What are the teams doing that hurt us in the last 20 minutes? We also have to work on our attack, we need to score more goals. All around, webjust need to tweak the little details, and there’s some changes we need to make going forward.

PP: So Canada is playing friendlies against the tier-one teams (Japan, Germany, United States) going into 2015, but you’re saying they can’t be seen just as friendlies?

DS: Yeah, if you don’t beat these tier-one teams going into the tournament, you go into it with the ‘what if?’ factor. And we don’t want that. We want to go in there confident, that we can beat these teams, that we can compete with the best teams in the world. We need to do that in the build-up over the next eight months. So, Japan is a big test for us, and we’re not going out there to tie (Canada ended up losing both matches). We are going out there to win the game.Anytime you come to play Canada you are going to get a tough game. And I think our coach (John Herdman) has gone out of his way to plan and be strategic about the teams we are playing leading up to the World Cup. These are the teams we may need to face in order to get to the final.

PP: How would you rate the confidence level of the Canadian team at the moment?

DS: I don’t think we’ve hit our peak. Obviously, we have all just gotten into residency over the last three weeks, players coming from Sweden and me from the U.K. So we’re all just getting back in to start gelling. I think we have raised the bar with each other, we are pushing each other individually and as a team.

PP: Has it felt like the wait for the World Cup has been long, or has time flown by since it was announced that Canada would be hosting the tournament?

DS: I definitely feel that time is flying by. I remember that, just after Olympics, we were like ‘now we’ve got to prep for the World Cup.’ And, before we know it, it’s gonna be June 6th, and we’re going to be opening the tournament right here in Edmonton. So eight months seems like a long time, but it really is just around the corner.

PP: You have these eight months in Vancouver — is there a chance to get home to Winnipeg?

DS: You accept the fact that we have the chance to do something very special. Very rarely do you get the chance to host a World Cup, so the coaching staff and the group have done their best to make it a sort-of balance. We do get to go home here and there, Christmas time we’ll all be at home. But we have all bought into a plan and we are focused on it.