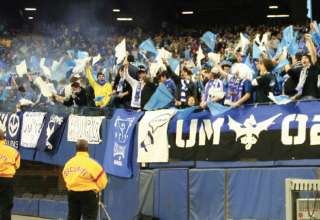 The Impact’s Ultras made their presence felt at Olympic Stadium during the first leg of the 2009 CONCACAF Champions League quarter-final.

Ask Montreal Impact fans to name their team’s high-water mark, and the large majority will cite the 2009 CONCACAF 2-0 quarter-final first leg win against Santos Laguna, which drew over 55,000 jubilant fans to the Olympic Stadium. The Mexican side took the return match with a furious last-gasp comeback — scoring twice in second- half stoppage time — and moved on to the semis.

The Impact is slated to meet another Mexican side — Club do Futbol Pachuca — in this year’s quarter-final, this time hosting the deciding leg of the series on March 3 after an away game opener on February 24. The game will be at Olympic Stadium.The Impact hopes to revive the spirit of 2009 and in so doing get the 2015 MLS campaign off to a positive start.

While the Olympic Stadium and Saputo Stadium are urban neighbours, an Impact match at the Big O is definitely not a home game in the traditional sense. There’s also more to putting on a game in the concrete cavern than loading gear on a truck, running it down the hill and reminding players to get off at Pie IX rather than the Viau Metro station.

“Any time we go to the Olympic Stadium it’s a major undertaking for us. We’re getting used to it now though because it’s been a few years. The first thing that is different for us is that, although it is not far from Saputo Stadium, we’re not in our facility so it complicates the organization a little,” says Richard Legendre, Impact vice-president of soccer operations and Saputo Stadium.

Promotion is more involved and extensive when trying to fill close to three times the capacity of Saputo Stadium — and then there’s the matter of the playing surface. The Impact will not be playing on the same knee-destroying surface that made a Chicago Cub out of Andre Dawson. The club has its own plastic pitch cover and will have it installed at Olympic Stadium well ahead of match week, an operation that goes more smoothly with repetition, according to Legendre.

“It used to be a challenge. It’s not the case so much any more because the people with whom we deal know very well how to do it,” he says. “It’s a challenge when we have to do it in a very short time but that’s not the case this year.

“This year, the nice thing about it is that we’ll be able to install the field much earlier. Our team will be practising at the end of January on the turf. We won’t have to take it out between January and March.”

Two weeks of training on the Olympic Stadium surface will provide a measure of familiarity with the artificial surface. A fortnight of altitude training in Mexico ahead of the opening match is intended to acclimatise the Impact to Pachuca’s 2,400-metre elevation and give the Canadian club a better chance of coming back to Montreal with a result.

“The more they practice on the turf in the Olympic Stadium, the more it gives them a home-field advantage, which the Mexicans surely will not have, especially in the beginning of March in Montreal. I don’t think the Mexicans will feel at home, and that’s OK,” says Legendre, ending with a chuckle.

Despite not being the club’s prime objective for 2015, the upcoming series against Pachuca still holds significance.

“Champions League is always important. It brings a lot and all the players throughout the world know its importance. The best part of 2014 was to be able to qualify for the quarter-final,” Legendre says. “We don’t feel we’ve arrived somewhere, we’re just at the beginning of something with the quarter-final and we intend to go as far as possible but, this being said, in 2015 of course the first priority is going to be to make the playoffs in MLS because this year [the 2014 season which saw the team miss the playoffs] was a year that we want to forget. We don’t want to go through that again.”

Legendre does not view beginning serious competition early in the year as a negative for the Impact but as something that can contribute to ongoing success in the upcoming season. It will not affect the team’s recruiting process other than possibly speed things up a little and might well serve as a motivating factor for the players.

“The players are already happy to come back for camp but when they know that something like five or six weeks later, they’re playing a very important game I think it’s more positive than anything else,” he says. “I think it’s going to help. The players are going to be focussed and motivated very, very early in the season.”

There are, however, a couple possible impediments to seeing the Impact faithful assemble in large numbers at the Olympic Stadium on March 3, both beyond the control of the Impact organization.

One is the fact that the Collective Bargaining Agreement between MLS and the players union expires in January. With no contract in effect, the matches could be in jeopardy.

“The union has jurisdiction with regard to all games played by all MLS teams. Once the CBA expires, the no-strike, no-lockout provision contained in the agreement expires, so it is possible that there could be a work stoppage at that time,” reads an email from Bob Foose, executive director of the MLS Players Union.

But Legendre seems unconcerned by that possibility.

“I think the discussions have already started. I think both parties are pretty confident that it will come to a positive ending. Right now we do not know much more than that. We’re all getting ready for the start of the season,” he offers.

The other potential problem is an irony that is particular to Montreal.

“We got to the Olympic Stadium because we need a roof because we’re in winter. That’s why we’re at Olympic Stadium, but the problem is the roof,” Legendre says. “We never know. If there’s a bad snow forecast we have to postpone the game and that’s an unfortunate situation. Last year we were hit by that situation our first game of the season and we had to postpone it to the following day and in terms of promotion and organization, that’s everything but simple.”

Repeating the attendance numbers and re-creating the atmosphere of the 2009 game against Santos Laguna is a tall order, but one Legendre feels the team has a good chance of achieving.