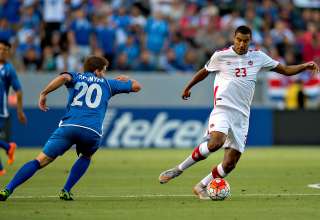 But at no time in that scoreless 2013 run did Canada have a chance as clear-cut, as golden, as the one that Cyle Larin spurned in the first half of the match in Carson, Calif. against El Salvador.

Larin was in alone. He’d rounded El Salvador keeper Derby Carrilo and had nothing but an open net.

And he blasted the ball high and wide. As in, nowhere close to the gaping target.

“The miss by Larin is part of the game, it happens,” Canadian national-team Coach Benito Floro said through an interpreter.

Yes, Larin’s momentum was taking him away from goal, not towards it, but a striker of his ability should be able to turn and get that ball towards goal. Alas, it was not to be — and, outside of two second-half headed attempts from Marcus Haber that both went directly to Carrilo, Canada didn’t create much else.

In fact, in terms of good chances at goal, Canada had the best opportunity (the Larin miss), but then the rest of the quality chances belonged to the El Salvadorans. Striker Irving Herrera had two great looks at the Canadian goal in the first half, but was denied both times by keeper Kenny Stamatopoulos.

But, while Stamatopoulos looked good on the Herrera chances, he was shaky late in the first half; on two consecutive El Salvadoran crosses, he decided to punch rather than try to catch the ball. On both occasions, the punches were mishit, and the ball stayed alive in attacking areas for the men in blue. Luckily for the Canadians, the ball pinged around the penalty area before going out of play.

In the second half, Tampa Bay Rowdie Richie Menjivar had the best chance for the El Salavdorans, but Stamatopoulos did well to cover up the shot from the top of the box.

Coach  Floro left veteran Julian de Guzman on the bench, deciding to start youngsters Samuel Piette and Kyle Bekker in holding positions in the midfield. But, the El Salvadorans enjoyed the majority of the play in the middle of the park, consistently pouncing on Canadian giveaways and exposing the two youngsters.

With Costa Rica drawing Jamaica 2-2 in the other Group B game, you could argue that the 0-0 draw is, well, OK. But the pressure will be on for Canada to get a result against the Reggae Boyz when they meet on Saturday in Houston.

But one thing we do know; that Canada simply doesn’t create enough chances where it can afford to miss open nets.