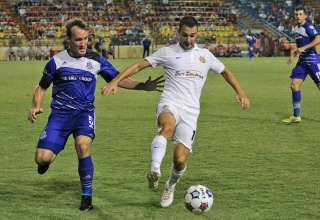 Let’s think back to the 2013 Gold Cup. Interim Canadian national-team coach Colin Miller was taking a lot of criticism from this country’s soccer supporters. The claims were that Miller’s defensive style was a major reason for Canada’s goalless three-matches-and-out at the CONCACAF Championships. Miller was derided on message boards, Twitter, comment sections.

Now, two years later, it’s looking like the cabal of Miller critics owe the man an apology — at least for the criticisms of how he handled the national side. While Canada flounders through another goalless Gold Cup (as Morrissey once sang: Stop me if you think you’ve heard this one before), Miller’s FC Edmonton leads the NASL in goals scored. After a 1-1 draw with Fort Lauderdale Saturday, the Eddies have scored 23 times in 12 combined spring- and fall-season matches.

Under Benito Floro at the 2015 Gold Cup, Canada is goalless through two games — and faces a must-win final match against Costa Rica at BMO Field. Jamaica beat Canada 1-0 in Houston on Saturday night, thanks to a last-gasp headed goal from Rodolph Austin.

As Canada was getting shut out (again), the Eddies got a weird own goal in Fort Lauderdale to tie the game with just four minutes left on the clock. Sadi Jalali ripped a shot off the post; keeper Josh Ford dove and missed the initial attempt. The ball came back off the post, hit Ford in the back of the head, and rolled into the goal. For an Eddies team still dealing with what Miller calls the worst injury crisis he’s seen in over 30 years of pro soccer — as well as the absence of six-goal, four-assist left winger Lance Laing, who was on the Jamaican bench in the win over Canada — a draw in Florida is a decent result. And, despite many of the disappointments from the spring season, the Eddies are just four points out of the fourth and final post-season slot in the NASL combined standings. (The Eddies also top the table — thanks to goal difference — in the fall-season standings, but we’re just a couple of weeks in, let’s not get ahead of ourselves.)

“I’m extremely proud of everyone who’s traveled, they’ve put in a fantastic effort at a very, very difficult venue,” said Miller. “To go a goal down and to continue to come forward in the game, it speaks volumes about the character. I mean, it’s 92, 93 degrees, humidity, all that stuff. It wouldn’t have been an excuse because I don’t use it as an excuse — but it’s a fact.”

Bruno Zebie – signed on an emergency basis a couple of weeks ago, made his Eddies NASL debut on Saturday, coming on in the 77th minute. His brother, Allan Zebie, played the full 90 — so it marked the first time the Eddies had two brothers on the field together.

(Two Edmonton brothers, by the way — since this column suggests Miller deserves an apology for the criticisms he took when he led Canada, we might also want to address the “FCE never plays local players” naysayers, too)

The Eddies gave up a Walter Ramirez penalty-kick marker midway through the second-half, after a foul was called on keeper Matt VanOekel. Miller said VanOekel assured him that he did not foul the attacking player — and the keeper complained vociferously after the call was made.

Back to Houston and the Canada debacle.

The nature of the goal — a heartbreaker in second-half injury time — suggests that the game was closer than it actually was. Outside of one early chance for striker Tosaint Ricketts, Canada did nothing to threaten the Jamaican goal. In fact, despite the additions of talent such as Cyle Larin and Tesho Akindele, you could argue that the match against Jamaica was proof that Canada is more ineffectual going forward in the 2015 Gold Cup than it was in 2013.

Shots on target? Jamaica 5, Canada 1. Shots fired towards goal? Jamaica 16, Canada 3. And, before Jamaica got the Austin winner, the Reggae Boyz missed numerous chances, and had a shot cleared off the line. In fact, had Austin not headed home the winner, we’d be talking about how the Jamaicans’ poor finishing cost them points in a game they should have won by two or three.

For Canada, three attempts on frame. That averages out to one every half an hour. And just one shot that forced the keeper to make a save. One.

To put in perspective, Canadian women’s national-team striker Janine Beckie had to make more saves in a mop-up role Saturday when she was used as an emergency back-up in a 5-2 Pan Am Games-opening win over Ecuador. Beckie — who had already scored twice — had to come in late in the game after keeper Stephanie Labbe was sent off for denying a clear goal-scoring opportunity.

This column is by no means an attempt to belittle Floro. But it does point out that Canada’s lack of scoring at the senior national-team level is problem that can’t be solved by a head coach alone. It is the result of mass problems in our coaching and developmental processes — and those issues can’t be hung on Floro in 2015.

Just like they shouldn’t have been hung on Miller in 2013.

(Apologies to Imre Kertesz for the headline)