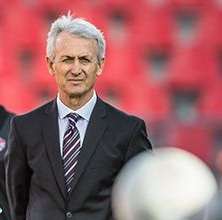 There are 10 MLS players on Canada’s roster for the upcoming Gold Cup.

But national-team coach Benito Floro lamented how few of those 10 players are actually seeing regular MLS minutes when he spoke to media on a conference call Monday evening.

“The big problem is most of the young players are not starting in MLS,” he said.

And he wasn’t shy to point out that the Canadian MLS teams aren’t carrying their weight. The Vancouver Whitecaps and Montreal Impact contributed one player each to the Gold Cup roster — Russell Teibert and Maxim Tissot, respectively. But neither is a put-it-in-ink starter for their respective clubs. To put it in perspective, FC Dallas (Tesho Akindele and Kyle Bekker) had more Canadians selected for the national team than the Whitecaps or Impact. And Bekker is by no means a regular, and Akindele has seen his MLS minutes reduced of late.

Floro said that, in most countries, there are domestic leagues — where the teams in the top two divisions nurture rosters that are 70 to 80 per cent populated with domestic talent. We have no such league in Canada — but what we do have are Canadian teams in MLS and NASL. And Floro suggested that the Canadian MLS teams could do more.

“We have three teams who are playing in MLS,” said Floro. “But only two or three players are starting. That’s a bad position for us, no?”

And Floro said that, when he sees young Canadian talent, it stacks up against youth players from the rest of the world. But he said the big difference is the meaningful playing time that Canadians receive — as in, the Canadians don’t see enough first-team minutes. And, while, Floro was having the questions translated for him, it was clear that he was speaking about first- or second-division minutes. Not reserve teams. Not satellite clubs.

Canada kicks off its Gold Cup Wednesday in Carson, Calif. against El Salvador. Then, on Saturday, Canada will be in Houston to face FC Edmonton star and NASL MVP candidate Lance Laing, along with his Jamaican teammates. Canada wraps up the group stage July 14 with a match against Costa Rica at Toronto’s BMO Field.

For Canada, a good performance at the Gold Cup is necessary in order to qualify for the centennial edition of the Copa America. Because there are other variables at play, Canada doesn’t quite yet know how far it needs to progress to cement a spot in the tournament.

But, despite the inexperience of his team, Floro won’t rule out a shock run at the Gold Cup for Canada.

“We play against strong teams, but, in soccer, nothing is impossible,” he said.