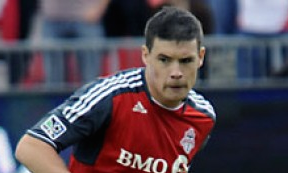 Toronto FC was looking to bounce back from its dismal effort and the tongue-lashing dished out by coach Paul Mariner after Wednesday night’s dismal performance in a 2-1 loss to Chicago Fire at home.

The team definitely rebounded with a better overall team game but the Philadelphia Union (7-13-5) snatched victory out of TFC’s grasp with a goal in the game’s final minutes, allowing the visitors to escape BMO Field with a 1-1 draw. TFC (5-17-7) rued the missed opportunities in a strong first half and lacked the mental toughness once again in the late stages of a game that erased the advantage supplied by Eric Hassli in the 58th minute.

TFC’s winless streak has now reached nine games and the team remains entrenched in the cellar of the Eastern Conference.

Defender and captain Darren O’Dea has never been part of a team that has suffered through a slide as long as he has endured since joining the Reds. He did not hold back his opinions and called the late collapses a result of the lack of mental toughness on the team.

“It doesn’t matter how well you play for 89 minutes, it’s the whole game that matters,” said O’Dea. “The ability is there. There is no question of that. The team is mentally weak. Tough times in games we don’t hold out, we concede late goals. Since I’ve been here there’s been four or five goals between the 80th and 90th minute. You can’t do that in football…the ability is there but when the going gets tough we’re not mentally strong enough.

Mariner felt his team came out with a lot more jump compared to its last match and should have had the three points but the inexperience of his players showed again.

“I really thought we were going to pull through today. The players we put out there we got a decent reaction,” said Mariner. “We limited them to not a great deal to be honest. We could have been up three by halftime. Decent response from the lads to be honest. Again it’s little bit of naiveté where the goal comes from, clearing the lines basically.

“I am happy but you can’t keep making the same mistakes on the football field…Whatever it takes to win a football match that should be our mantra.”

Toronto had its chances early on as the team came out fired up — no doubt feeling the sting of Mariner’s wrath after a tough day of practice in the rain the day before.

Luis Silva was the most active up front for TFC, along with Ryan Johnson and Terry Dunfield playing well in their returns from international duty. Ashtone Morgan was out of the lineup from a suspension due to yellow card accumulation after returning as a sub on Wednesday night.

After a scoreless first half, Hassli broke the deadlock after receiving the pass from Silva, who was in deep near the right touchline. The French striker, from the right side of the box, pulled the ball towards the far side and it hit the left post before going in. The goal was the third for the French striker since joining TFC, but his fifth overall this season including his two goals with the Vancouver Whitecaps.

Hassli suffered a harsh challenge in the 78th minute and was forced out of the game with an ankle injury. Dunfield took exception to the play by issuing a wild tackle himself which resulted in some pushing and shoving. Hassli walked gingerly off gingerly walked and was replaced by Quincy Amarikwa.

Shortly after the injury, things went horribly wrong for TFC. The Union’s Roger Torres started the play on the equalizer by controlling nicely from the left side of the box and then dribbled the ball to the middle. The ball was eventually passed off to Antoine Hoppenot, who was open on the right edge of the box. He sent a pass/shot into the crowded goalmouth area and the ball went off a TFC defender before deflecting right to defender Sheanon Williams, who easily tapped the ball past a helpless Milos Kocic in the TFC goa;.

Silva felt his missed chances could have been the difference in the game.

“I actually thought the team played well today from the beginning of the game,” said Silva. “I had my chances and feel responsible for the tie. I should have put one away in the first half.”

Aside for spots in next year’s lineup and finishing strong, there is little left for Toronto to play for this season. The focus will soon switch to next season but it’s obvious to O’Dea that the Reds have a lot to improve before the losses and ties start turning into wins.

Toronto will be in tough to bounce back from another disappointing finish and find a win in its next two matches. The team will first travel to Los Angeles to take on the Galaxy next Saturday and will remain on the road the following week against the New York Red Bulls. TFC will return home to host D.C. United on Oct. 6.