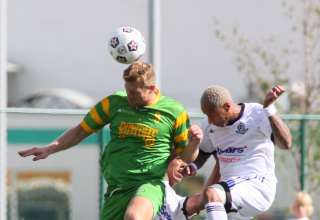 FC Edmonton turned September into Christmas for the Tampa Bay Rowdies. The Rowdies scored three times on major defensive lapses by the Eddies on Sunday, cruising to a 3-0 win. And it was ex-Eddie Daniel Antoniuk that did the most damage, scoring the opening goal and then setting up the third.

“It’s always great to score against your former team,” said Antoniuk. “There’s always a bit of a chip on your shoulder.”

In two games in Edmonton this season, one at home, one on the road, Antoniuk has scored the winning goal. He said that he still loves the city.

And why wouldn’t he, considering how gracious the hosts were? Yes, the NASL cellar-dwelling Eddies had just a couple of games left on the schedule and are playing out the string. But the team has talked about playing for pride, playing for the fans.

Instead, after the match, forward Kyle Porter said, “I feel we should apologize. We started the game well but then we lost focus.”

The opening goal of the game came when an unmarked Antoniuk latched onto a free kick from Luke Mulholland, as Tampa Bay accepted an absolute gift thanks to the Eddies’ poor marking. Keeper John Smits could only flap his hands helplessly at the goal-bound header.

“I started my run across the face of goal before he (Mullholland) hits it,” said Antoniuk.

Because of injuries to regular central defenders Paul Hamilton and David Proctor, Kevin Hatchi was switched from left back to the centre of the defence, while Chris Kooy got a start as the other central defender. The Eddies also missed leading scorer Shaun Saiko, out with injury.

And the new defensive pair was culpable on the second goal, as well. Mike Ambersley got the ball 30 yards from goal, with the entire back line in front of him. But Hatchi chose to back off rather than challenge Ambersley, who had no passing options. Because Hatchi backed off, Ambersley had plenty of time to measure a perfect shot inside the post.

“The world is upside down,” said Eddies’ coach Harry Sinkgraven. “We have five great chances and no goals, they have two chances and two goals and,well, the second goal wasn’t even really a chance.”

In the first 20 minutes, the Eddies were able to slide diagonal balls to Porter and Michael Cox, who were regularly getting behind the Tampa Bay backline. The Rowdies were playing a very high line, daring the Eddies to get behind — and get behind they did.  But a series of late interventions — a diving tackle by Canadian Andres Arango on Cox, a shoulder barge by Rowdies defender J.P. Rodrigues on Cox, a great save from keeper Jeff Attinella after Porter one-touched a lovely through ball from Antonio Rago — kept the game scoreless early.

Then, 20 minutes in, Rowdies coach Ricky Hill went from a 4-3-3 to a 4-4-2, giving his backline some help and giving the Eddies’ midfield less time to pick out the passes — and the game changed.

And the Rowdies took advantage of what the Eddies gave them. In the second half the Rowdies got the killer third goal when Antoniuk nodded a ball across the box for a diving Mulholland to bundle home. Antoniuk lost his marker, Kenny Caceros, and was able to nod the ball across the face of goal.

The Eddies got some life through striker Elvir Gigolaj, who was given the chance to play the entire second half, rather than his usual four or five minutes late in a game. Gigolaj looked to have set up Bryan Arguez for a consolation goal after he made a clever step-over in the box, but Rodrigues blocked the chance with a late dive.

Former TFC Academy product Dino Gardner also got a run-out late in the match for the Eddies, as the focus is now preparing for 2013.