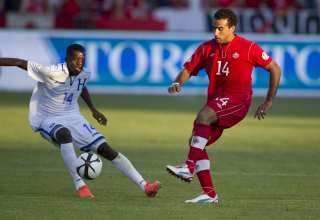 The Canadian men’s national team will go into its two biggest World Cup qualifiers in more than two decades without the country’s all-time leading scorer.

On Thursday, D.C. United announced that Dwayne De Rosario has a Grade III sprain of his medial collateral ligament and will be out for 10-12 weeks. That means he will miss the rest of the MLS regular season and, more importantly for Canadian soccer fans, won’t be available for Canada’s final two CONCACAF Group C matches, home to Cuba and away to Honduras.

De Rosario suffered the injury early in Tuesday’s 2-0 loss to Panama, after he collided with Panamanian Felipe Baloy.

Canada has seven points from four matches, two behind Panama. Honduras, who earlier held Canada to 0-0 result at BMO Field, also has seven points. Canada will likely need to pad its goal difference when it faces Cuba in Toronto in October, a huge ask for a team that has scored just twice in four Group C matches and is without its top goal-scoring threat. And, after that, Canada will likely need to get some kind of result out of the road date in Honduras.

“DeRo is our captain, a great player and impossible to replace,” said D.C. United Head Coach Ben Olsen in a release issued by the club. “With that said, we have talented players that will step up in his absence and this injury will not be an excuse to fall short of goals we set for ourselves as a team at the beginning of the season.”