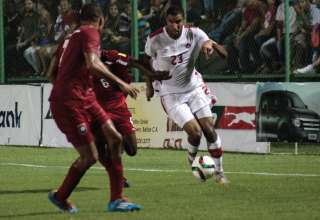 Canada will begin the next stage of World Cup qualifying in November. To make it to CONCACAF’s infamous “Hex,” Canada will need to finish first or second in a group that includes Mexico, El Salvador and Honduras. Coach Benito Floro thinks that Mexico is guaranteed a spot — so it’ll be between Canada and the two Central American nations for that second slot…

Get to Russia in ’18? Or just erase the memory of 8-1? The Canadian men’s national team has a chance to accomplish both missions in the next round of World Cup qualifying. That’s because Canucks’ path to the CONCACAF Hexagonal goes directly through Honduras.

Canada notched a 4-1 aggregate victory over Belize in the third round of CONCACAF qualifying, sending it through to the fourth-round group stage. Canada will need to mange a top-two finish in a group consisting of Honduras, Mexico, and fellow third-round qualifiers El Salvador.

Given Mexico’s pedigree, Canada head coach Benito Floro as much admitted that there’s really only one spot available.

“We can consider that Mexico is a step over the others but the other three, we have the same possibilities,” Floro said. “These games for us are very important, the same as a World Cup. We can’t start the mistakes… I consider it very important for us to demonstrate that we are capable of qualification.”

It’s worth noting that “capable of qualification” is different than actually qualifying,though even a hard-fought elimination would represent some progress for Canada given how horribly it crashed out of its last run at a berth in the World Cup finals. The 8-1 demolition that Canada suffered in San Pedro Sula on Oct. 16, 2012 led to coach Stephen Hart falling on the sword; Floro was later hired to push the reset button on the entire national program and endure the growing pains that came with such a rebuild. The Honduras loss was the first entry in Canada’s epic 16-game winless streak, which also included a spell with Colin Miller as the interim coach.

While nobody expected Floro to turn things around immediately, the jury is still out on how much Canada has improved in his two-plus years as head coach. The scoreless three-and-out performance at this summer’s Gold Cup was an ominous sign, and Canada didn’t exactly settle questions about its striking prowess in the Belize tie.

If there’s such thing as an unsatisfying 3-0 result, it was Canada’s performance at BMO Field in the opening leg against Belize. Canada was never in danger of falling behind against a Belize side that more or less played in a defensive shell the entire match, producing only one “shot” (really a missed cross that went 20 yards wide of the net).

Canada, meanwhile, fired 12 shots (10 on target) and converted three, though that total could’ve been doubled had the Canucks been more clinical in front of the net.

“We had a lot of room down on the wings today… Finishing needs to be better going through the next stages of qualifying now and I think that’s what we need to work on,” defender Nik Ledgerwood said. “It’s frustrating sometimes but you need to keep digging away. You know the hard work will eventually pay off.”

Tosaint Ricketts had a brace, earning his first goal on something of a sloppybut- hard-working scramble in front of the Belize net in the 25th minute. His second was much more aesthetically pleasing, as Ricketts converted a nice Ledgerwood cross. Atiba Hutchinson, back with Canada after missing the Gold Cup with a groin injury, marked his comeback match with a stoppage-time goal that put the tie on ice.

It’s perhaps pessimistic to focus more on the 1-1 draw in Belmopan than from the 3-0 win, though Canada can hardly afford such lacklustre road performances if it has any hope of further advancement. Even Canada’s recent calling card of solid defence was hard to gauge given Belize’s total lack of interest in attacking during the first leg.

Adam Straith did a poor job on Belize’s goal in the second leg, as he essentially let striker Deon McCaulay rush right past him to score on a give-and-go play.

Canada did equalize soon after on a goal from Will Johnson, whose appearances against Belize marked his first national-team selections since 2013. The returns of Hutchinson and Johnson should bolster Canada’s attack, though it may take more time for all the parts to gel.

It might also help the Canucks’ chances if all of the country’s best footballing parts were actually available for selection.

Toronto FC regular Jonathan Osorio was rather surprisingly left off the roster for the Belize matches in favour of Kyle Bekker, who has largely been a reserve for FC Dallas and the Montreal Impact this season and didn’t receive any minutes against Belize.

“The only reason [Osorio was left out] is because there are two players, thinking about Will and Atiba, who are in good condition to play. I consider them more experienced players also,” Floro said prior to the Belize tie.

Even if the coach wasn’t planning on  starting Osorio, however, you’d think the TFC midfielder could’ve at least been on hand as bench depth. It’s possible a midfield

spot could open up given that Julian de Guzman left the first Belize game after just 14 minutes with what Floro called a “minor calf injury.” Since de Guzman has been bothered by leg injuries and missed time in the Ottawa Fury’s NASL fall season, his fitness could be a question come November’s matches.

Canada hasn’t made it into the six-team final CONCACAF qualification round (the “Hexagonal”) since its bid to reach the 1998 World Cup. If it’s to break the hex of the Hex, it will have to do it in what is likely the toughest of all three qualifying groups. Mexico is a giant of North American soccer, Honduras has qualified for the last two World Cups and even El Salvador is far from a pushover, having played Canada to a scoreless draw in July at the Gold Cup.

Against this competition, Canada is the minnow the other three clubs are looking at as easier points. The first game will take place against (who else?) Honduras on November 13, though this game will be in Canada; the Canucks don’t return to the unfriendly Honduran confines until September, 2016. By then, we’ll know if Canada’s quest for redemption will be about saving face or about having a legitimate shot at a World Cup appearance.