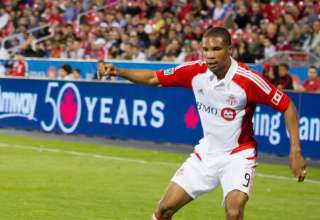 Not even the return of Torsten Frings could bring an end to Toronto FC’s losing streak.  In fact, the team captain helped prolong it.  Frings’ mistake in the opening seconds was the first of several defensive miscues for the Reds in a 3-2 loss to the Chicago Fire on Saturday at BMO Field.

The loss extends TFC’s franchise-worst losing streak to six games and the Reds are now just one more defeat away from tying Kansas City’s record of seven losses to begin an MLS season (set in 1999).

Saturday’s match also saw Toronto tie another ignominious mark, as they were the victims of the quickest goal in the Fire’s franchise history.  Just moments after the opening whistle, Frings committed a sloppy turnover to Chicago’s Patrick Nyarko right in front of the TFC net.  Nyarko passed to a wide-open Dominic Oduro, who fired it home for his third goal of the season.

At just 25 seconds into the game, Chicago’s goal tied for the fifth-quickest in league history.  It served to quickly deflate the announced crowd of 19,255 and it proved to be a portent for the rest of another disappointing game for the Reds.

“We started very badly because of my fault,” Frings said.  “We give the goals too easily away.  A lot of the mistakes today are my mistakes too.  We have to try and make it better.”

Frings was making his first appearance since suffering a hamstring injury in TFC’s season opener on March 17, and his absence as a leader and organizer on Toronto’s back line was a major cause for the Reds’ poor start.  Frings started on Saturday in the middle of a three-man back line between Richard Eckersley and Adrian Cann, with Matt Stinson and Ashtone Morgan providing some support on the wings.

Or, at least, that was the plan.  It seemed to take Frings about 45 minutes to fully get back into game mode, leaving TFC vulnerable to Chicago’s quick strike force.  Not that Frings was solely to blame — Oduro nearly scored again on a breakaway in the 11th minute thanks to a midfield turnover from Terry Dunfield, but Toronto goalkeeper Milos Kocic came way out of the net to make the stop.

The only thing that seemingly slowed Oduro down was Cann’s elbow, as the defender clocked Oduro with a blatant foul in the 24th minute that wouldn’t have looked out of place in the Stanley Cup playoffs.  Cann was booked on the play but could easily have been shown a straight red card.

On the attacking side, Toronto was still creating chances even without Danny Koevermans, who missed the game due to a groin injury.  Reggie Lambe got the start at forward and made the most of the opportunity, single-handedly ending TFC’s scoring woes at BMO Field.

In the 36th minute, following a corner, the ball bounced back to Lambe on the left side.  From about 25 yards out, Lambe sent a tremendous right-footed shot into the left side of the net.  This pinpoint strike (a major Goal Of The Week candidate) was Lambe’s first goal with Toronto, as well as TFC’s first home goal of the season.

Four minutes later, Lambe struck again.  Ryan Johnson took a pass from Joao Plata and crossed in front of the net, where Stinson and Gonzalo Segares fell over each other while knocking the ball to the right side.  Lambe was in position, however, to convert the rebound.  It was Lambe’s first multi-goal game in any competition since scoring four for Bermuda against St. Martin in August 2008.

Toronto FC finally had its first lead of the season but it was short-lived.  Less than a minute later, the Fire’s Sebastian Grazzini curled a free kick from 25 yards out right into the box and onto the foot of an unmarked Segares, who just had to tap the ball out of the air with his foot to find the back of the net.  TFC’s lead, and its momentum, had evaporated just as quickly as it had developed.

“That’s just not using our heads, I think,” Johnson said.  “That’s when you have to be most aware, right after you score a goal.  This is a lesson for anyone in football; once you score you have to be ready to defend right away.”

The most haunting breakdown, however, was still to come.  In the 58th minute, Nyarko took a long pass down the right side.  Though Eckersley and Frings were closing, Kocic decided to again make a long trip out of the goal area to challenge for the ball.  It ended up being a fatal mistake as Nyarko evaded Kocic and booted it home for an easy goal.

“I think if we score two goals we should win the game, so it’s our fault to give up three goals,” Johnson said.  “These mistakes are killing us and it’s killing Toronto and our fans.  It’s hard to keep letting down our fans every week and it’s really starting to get to me.”

Johnson’s frustration continued as, for the second straight week, he missed on two very close scoring chances.  His shot off a deft Luis Silva pass in front of the net missed by such a slim margin that it even confused BMO Field’s cannon operator, who fired off a celebratory volley of confetti by accident.  Two minutes later, Johnson fell short again, this time heading the ball off the left post.

“I’m hitting the post, last [game] I had two balls cleared off the line,” Johnson said.  “I’m continuing to get myself in place for scoring chances and today I set up one for Reggie so I’m trying to do my part.  It’s really hard right now for us.”

Julian de Guzman was out of the Starting XI for the second straight match, only entering as a substitute for Dunfield in the 58th minute.  His insertion seemed to wreak havoc with Toronto’s formation, as the Reds played what looked like a fluid 4-2-2-2 for the remainder of the match, with Lambe rather inexplicably dropping back to play the wing and Frings moving up to an attacking midfield role.  With such confusing tactics, perhaps the Reds were lucky to even manage Johnson’s opportunities, though Frings had a good scoring chance that went wide in the 63rd minute.

TFC head coach Aron Winter admitted he was disappointed by the lack of results from his team and the fact that so many of the Reds’ mistakes look like deja vu.

“It looks like each time you’re making the same mistakes, to not be as sharp or focused or whatever, and you give away so very easily the game,” Winter said.  “It could be at certain moments the quality, or lack of focusing, it could be everything.  It is not good because it is too easy, at that moment you’re giving the game away.”

Winter said his isn’t satisfied with his defence both in terms of performance and, apparently, personnel-wise.

“We have brought some players in but still it is not enough to succeed,” Winter said.  “And we noticed last year and also now at the beginning of the season that defensively we need to reinforce and we still try to look for better players.

“We brought a player in like [Geovanny] Caicedo but it didn’t work out because at that moment he was not happy.  We brought in [Miguel] Aceval but he still needs some time….But still we need some other defenders and two other defenders like Dicoy Williams and Adrian Cann that had long injuries.”

Winter even fielded a few questions about his job security in the wake of Toronto FC’s winless start, saying that he wasn’t worried and that he believes he will get the chance to fully serve his three-year contract with the club.  It’s hard to see the Reds making yet another coaching change and starting over with their rebuilding process just over a year into Winter’s tenure, though if this losing streak gets notably longer, TFC’s upper management may feel otherwise.

As if TFC didn’t have enough pressure trying to snap its losing skid, it’ll have to do it at one of the league’s most intimidating away venues when it heads to Rio Tinto Stadium for a game against Real Salt Lake next Saturday.  The Reds are 0-3 all-time at Rio Tinto.  TFC will have a bit of extra help in Koevermans, who Winter said should be ready to play next week.

“You have to keep positive,” Frings said.  “It’s not easy after this losing streak but it’s happened now and you have to keep working hard for the next week and the next game.”