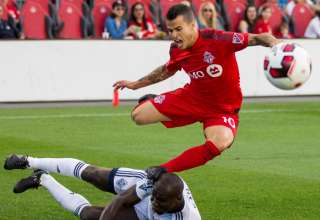 For a league that sustains itself on a strict diet of parity for its franchises, the Designated Player Rule is essentially Major League Soccer’s version of a cheat day. Maybe more specifically, the “David Beckham rule” is how MLS tries to have its cake and eat it too; all of the benefits of having a minimal salary cap plus some built-in flexibility to allow for some marquee superstars to play in North America.

In theory, adding a star player worthy of a DP designation and salary is the easiest way to upgrade a struggling team — such as, for instance, Toronto FC during any of its first eight seasons. The Reds resisted the urge to tap into MLSE’s finances for such a big name over their first two years in existence before finally taking the Designated Player plunge by signing Julian de Guzman late in the 2009 season.

It was too late, in fact, for de Guzman to help TFC reach the postseason, which became a common theme for the Reds’ DPs. The club’s first wave of Designated Players (de Guzman, Mista, Torsten Frings, Danny Koevermans, Eric Hassli, Gilberto, Jermain Defoe) all fell short of expectations due to some combination of injuries, lack of form, lack of a consistent role within the systems of the ever-changing Toronto coaching staff — or just not adjusting to the MLS style of play.

The argument could also be made, of course, that it’s unreasonable to ask one or two players to carry the thoroughly flawed rosters of those TFC clubs.

But how about three?

Gilberto, Defoe and Michael Bradley were all signed by Tim Bezbatchenko in his first offseason as TFC’s general manager, the infamous “bloody big deal” splurge that became a punchline as the Reds collapsed down the stretch. Though the 2014 Reds again missed the playoffs, Bezbatchenko still considers those signings as crucial.

“The reason we got big-name players we because this team had a history and culture of losing,” Bezbatchenko says. “Our fanbase was leaving and there was no belief….[the signings were] about proving to our fanbase that we are serious about winning and serious about our fans. That’s why we got Defoe and Michael and Gilberto.

“When you look at how you can quickly turn our club from the losingest franchise to the winningest, it was by first establishing a winning culture.”

The disappointment of 2014 didn’t cause Bezbatchenko and TFC management to alter their plan, only the personnel. Defoe and Gilberto were replaced by strikers Sebastian Giovinco and Jozy Altidore and, suddenly, the Reds’ DP-heavy strategy looked much more sound.

Altidore scored 13 goals in 25 games in 2015, an impressive performance that was still overshadowed by perhaps the greatest season in MLS history. Giovinco collected MLS MVP and Golden Boot honours for his whopping 22-goal, 16-assist masterpiece, and dazzled both fans and opponents on a near-weekly basis.

The former Italy international has barely slowed down this season, recording 15 goals and 11 assists over his first 23 games. The fact that Giovinco is providing such a strong follow-up campaign to his MVP year even has his own head coach amazed.

“We came into this year saying we can’t rely on the fact that Seba will score as many world-class goals again and yet here he is, scoring these same goals again,” Toronto coach Greg Vanney says. “That’s just pure talent and ability. Would we have expected it? Not really, as some of the goals [he’s scored] I’ve never really paid witness to in this league. He’s definitely continues to ooh and aah us and exceed our expectations with some of the things he’s able to accomplish.”

So, is the lesson that as long as you sign the right Designated Player (or three), you can become a contender? Not exactly.

“You can’t be a Manchester City or a Chelsea where you just buy yourself a championship,” Bezbatchenko says. “Even if you buy a DP, that’s the biggest budget charge against your cap. When we have three Designated Players and two or three of them are out with injury, [the amount of] our cap space we have to spend is less than any other team has to spend.

“You have around 40 per cent of your cap tied up in three players. So, when you go out and say you’re going to get three DPs, you can’t think that’s what will take you to the top.”

While Giovinco has been brilliant on a whole, his season has also included an eight-match scoreless drought. That slump mostly coincided with Bradley, Altidore, goalkeeper Clint Irwin and midfielderWill Johnson all being out of action due to injuries and international duty. In past years, losing any key players for an extended stretch has crushed TFC time and time again, yet these Reds are battling for first place in the Eastern Conference thanks to contributions from the entire roster.

TFC’s notoriously leaky back line has been solidly firmed up by the additions of veteran defenders Drew Moor and Steven Beitashour. Former draft pick Alex Bono has stepped in admirably in Irwin’s absence. Homegrown midfielder Jay Chapman and TFC Academy products Jordan Hamilton and Mo Babouli have all received multiple starts and more than held their own in their first extended tastes of MLS competition.

“The story of our club is no longer spending big. For me, this season is a story about depth,” Bezbatchenko says. “That’s what we’re trying to build off of, and that’s what I think will make us consistent contenders.”

As much as Bezbatchenko believes the Designated Player signings were necessary to jumpstart Toronto FC’s fortunes, he knows it isn’t an ideal method for long-term success. The list of Designated Players who have been unquestioned successes for their clubs is a short one, both for TFC and within MLS as a whole. It obviously isn’t easy to find and sign a Giovinco, and Bezbatchenko hopes that in the future, the Reds will pursue such players not as needs, but as luxuries.

“Moving forward, what we’ve told the board and how we want to build our roster, it’s very academy-based and draft-based,” Bezbatchenko says. “That’s the backbone of our team. What we want to do is not have to rely on DPs to carry us, but for a choice to take us to the top… Maybe some of our young players won’t be stars or DP-type guys, but you’ll have a core group of guys who know our identity and will drive us forward.”

Teams in every sport place great importance on having young, cost-controlled talent, though it is particularly critical for MLS teams given the small salary cap ($3.66MM for the 2016 season) and the fact that the league isn’t about to change the way it does business.

Bezbatchenko feels MLS could “maybe soften” some roster transaction rules “around the edges” as the league continues to grow and expand, though changing to an open market isn’t remotely in the cards, as he noted how many European leagues — beyond the top four or five — are struggling financially.

“I think the owners are smart. The game is growing, expansion values are growing exponentially,” the GM said. “Why risk it if you take some regulations away, when you see what can happen [as in Europe]? People will spend more and make more mistakes. I don’t feel the league is in a place where it feel it needs to do that in order to compete with the top leagues.”

The MLS strategy and Bezbatchenko’s ideal for Toronto FC are, in fact, quite similar. Focus on building from within, while adding the occasional star to put a market (or even the league itself) over the top. Toronto has long been considered one of the league’s top markets despite the Reds’ near-total lack of success on the field, so TFC becoming a consistent winner would boost MLS almost as much as it would boost the franchise. TFC made a parody of parity with its long playoff drought, so if the league’s rules do invite some type of balance, perhaps the Reds are due several years of contention and a franchise on the right track.