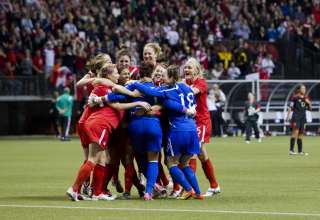 As the full-time whistle sounded, Christine Sinclair and goalkeeper Karina LeBlanc ran to the stands to grab a Canadian flag from the crowd and then paraded around B.C. Place with it.

After Friday’s game, there will be a large call now for Sinclair to carry a flag at the front of the Canadian delegation that walks into the Olympic Stadium this summer.

Sinclair scored twice and Melissa Tancredi added a third as the Canadians brought the 22,954 predominantly Canadian fans to their feet with a hectic 3-1 win over Mexico. Veronica Perez scored Mexico’s lone goal.

“We’re just a team that will never give up,” said Sinclair. “It’s something (Canada head coach John Herdman’s) brought to this program—the fight. When we gave up that goal in the second half I think in the past we would have collapsed. We just kept going and kept battling and got that third goal to close out the game.”

Sinclair’s first finish was a well created play coming in the 15th minute. Melissa Tancredi skillfully knocked down a high ball into the superstar striker’s path and with the Mexicans giving her way too much room, Sinclair blasted in from about 12 yards out.

“It’s a cup final. Anything goes in them games,” said Herdman. “The rules change. You’ve seen them play some fantastic stuff.”

Tancredi had a chance of her own right on the 21-minute mark. Sinclair was the provider this time as Tancredi was clear on the left side but her effort just went past the far post.

Just a few minutes later, Tancredi redeemed herself. Sinclair played on Kelly Parker before taking a late tackle from a Mexican. Parker crossed into Tancredi.

Canada came out with some early pressure in the first few minutes of the second half but their opponents finally seemed to get their feet and strung a few passes together.

Mexico really should have pulled one back in the 55th minute. Substitute Anisa Guajardo fed a low cross in that star striker Maribel Dominguez was unable to poke home from close range. While Mexico won a corner on the play, they conceded a free kick after a push on LeBlanc.

After sustained pressure, Mexico finally got one in the 67th minute. After LeBlanc could only half clear with a punch, Perez sprinted onto the loose ball and LeBlanc had no chance to save her mid-height shot with so much traffic in front.

Just as Canadian hearts were in their throat it was Canada’s darling once again. Tancredi, as she has done on a number of occasions, showed incredible vision to launch a high ball that Sinclair ran onto and, with Cecilia Santiago rushing out of the Mexican goal, knocked a lovely chip for her 129th career goal, which tied her for third all-time in international soccer with American Abby Wambach.

“I’ve studied her play and I just know where she wants to ball and know where she’s going to be,” said Tancredi of Sinclair. “She’s a fast girl and it’s very hard to defend her when she’s in behind you.”

Mexico tried for a quick reply with just over nine minutes to go but LeBlanc was sharp to backtrack and poke the ball over her crossbar.

As the three minutes of extra time ticked down, the B.C. Place fans rose to their feet to acknowledge the Canadian teams who did as they were expected and that’s book a place in this summer’s Olympics. Canada’s rebuilding from the debacle from last summer’s World Cup seems well and truly on track.