August 11, 2022
9 New Articles
Home NASL & USL FC Edmonton Love or hate the NASL’s 9-game spring-season sked, it made for a heck of an opening weekend 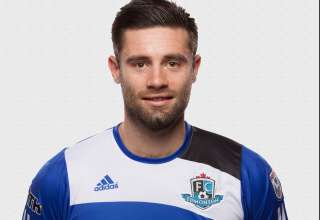 In MLS, a month and a half into a marathon where 10 of the 19 teams make the playoffs, it’s hard to make the argument that any game is really important at this stage. We’re still trying to ascertain the weaknesses and strengths of teams around the league, and no match has a do-or-die feel.

Now, whether you love or hate the NASL’s decision to create a spring season in which each of the 10 teams plays a nine-game schedule — with one of the top two playoff, er, “Championship” seeds going to the league champ — there’s no doubt it brought a sense of immediacy to the opening weekend. After just one week, we can seriously discuss which teams are on their way to being contenders (Minnesota, New York Cosmos) and which teams had disastrous opening weekends that badly damaged their spring seasons (we’re looking at you, San Antonio Scorpions).

As for FC Edmonton and the Ottawa Fury, the stakes weren’t as high because they were both burning road games on the abbreviated schedule. The key to winning the spring season will be making sure to take care of business at home. The Fury is still feeling the bitter sting of losing the season opener 2-0 at Fort Lauderdale; but those who hold optimism for the expansion franchise can point to the fact that five of the eight remaining games on the schedule will be at Carleton University, where the turf and odd lines should provide a significant home-field advantage.

As for the Eddies, a 1-1 result at Tampa — despite hitting a post and failing to convert a penalty in a game that saw them significantly outplay the host Rowdies — isn’t bad at all. FCE was one of five teams that had five road games and just four home dates on their schedules. Now, the Eddies have burned arguably their most difficult road date (FCE doesn’t have to visit the New York Cosmos in the spring) and didn’t allow the Rowdies to get three points out of a home game. Now, the rest of the Eddies’ schedule reads four at home, four away.

With a day to reflect on the draw, coach Colin Miller said that 1-1 was a bittersweet result.

“If you’d have asked me before the game, I would have taken the point,” Miller said after the Eddies returned home to the Alberta capital. “Tampa is a very good side, very well coached, very well prepared. But while they had a few spells in the game, I thought we deserved something more.”

Midfielders Neil Hlavaty and Ritchie Jones, who set up the late equalizer from Tomi Ameobi, were both held back in Edmonton till Thursday of last week, even though the majority of the traveling roster arrived in Florida the Monday before the Rowdies game. The players did so in order to acclimate to the heat and humidity and bond as a team. But Hlavaty and Jones, nursing nagging injuries, were both late decisions to participate in the opener, and Miller had nothing but praise for both of them.

He also praised young centre back Mallan Roberts and right back Kareem Moses, who made his NASL debut Saturday and had the misfortune of being credited with the own goal that gave the Rowdies the lead. But Miller felt Roberts, the youngest player on the back line, and Moses, did well to hold the line and keep the team’s shape.

As for Ameobi, who came on as a sub and scored late, Miller knows he has some tough choices to make. Last Thursday, he told Ameobi that Frank Jonke would start as the lone striker.

“His attitude was great, he said ‘whatever I can do to help the team,” said Miller.

But, putting Ameobi and Jonke together would be intriguing; basically a twin-towers approach at the top of the attack.

“There will come a point when I play Frank and Tomi together,” said Miller. “Will that be next week (when FCE hosts the Cosmos)? I will have to watch the Cosmos and see how they played against Atlanta.”

The Pickens Decision
Miller said he did have a sideline discussion with the fourth official over a curious decision made in the 1-1 draw. Early in the second half, Jonke was in alone in the box, after a loose ball. He got to it before Tampa Bay keeper Matt Pickens. After Jonke got the touch to push it past Pickens, the striker and keeper collided. Referee Sorin Stoica pointed to spot.

Miller was expecting to see a red card pulled, as well.

Miller said he asked why the red wasn’t produced; the answer he got was the officials felt that Jonke touched the ball away from goal and that a goal-scoring chance wasn’t denied.

Pickens saved the ensuing penalty. But, should Tampa have been down to 10 men — and been forced to put another keeper in goal for the attempt?

As for the other, ahem, unofficial Canadian team in NASL, it was an awful weekend. The San Antonio Scorpions, coached by Canadian Alen Marcina, and featuring Canadians Adrian Cann and Shaun Saiko in the starting XI, fell 2-0 at home to Minnesota United FC. The floodgates opened when Julius James, a former first-round SuperDraft pick of Toronto FC, was sent off early in the first half.

Losing at home can be fatal. And the naysayers who believe that the Scorpions have too many problem children on the squad have a first poor result to on which to hang their hats.