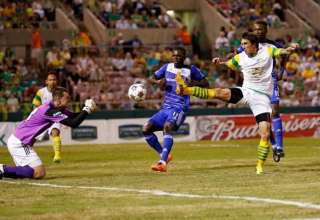 John Smits stretches to make a save in Tampa on Saturday night.

If there was a way to sum up FC Edmonton’s season-opening 1-1 draw with the Tampa Bay Rowdies on the bumpy grass of St. Petersburg that would be it.

The Eddies got a late equalizer off the head of sub Tomi Ameobi, who finished a perfect cross from Ritchie Jones. The exhilaration of a late equalizer can make up for almost 90 minutes of frustration — and a draw on the road in the heat and humidity of Florida isn’t a bad season-opening result.

Yet, it shouldn’t completely cover up the ill feeling that should come with the knowledge that the Eddies, based on the run of play, should be coming home from Florida with a lot more than a single point.

The Eddies created more scoring chances, and were the better side based on style points. But a missed penalty and another effort that caromed off the post punctuated a night of missed opportunities.

And, even though the Rowdies created precious few meaningful efforts towards the Edmonton goal until a few scrambles late in the match, the home side received a gift. In the 31st minute, FCE right back Kareem Moses looked as if he meant to shoulder a ball towards keeper John Smits. Instead, the ball popped up into the air and the Smits could only helplessly watch as the ball drifted in for an own goal. What should have been a harmless ball drifted in from Rowdies defender Darel Russell turned into a comedy of errors.

Yet, the Eddies created enough chances to overcome the Moses error. But, despite starting Canadian new faces like Frank Jonke up top, with speedster Horace James and English veteran Jones in attacking midfield roles, the Eddies looked once again like a team that needs to create 20 scoring chances to get one goal. The Eddies were the NASL’s lowest scoring group last season, and managed to toss away chance after chance Saturday night when it looked like it was harder to miss than to score.

Yes, Tampa Bay now has MLS veteran Matt Pickens in goal. But NASL has plenty of keepers with MLS experience — and, on Saturday, the Eddies made him look good.

“Bare bones minimum we deserved was a draw,” coach Colin Miller said after the match. And, if soccer was scored like slopestyle, where it’s about how good you looked, no doubt FCE deserved the win. But soccer is about getting that ball across the goal line, and FCE showed us that finishing chances is still an issue.

At no time was that clearer than early in the second half. With the Eddies trailing 1-0, Jonke chased a ball behind the Rowdies’ backline. Pickens came out late to challenge Jonke, and the FCE striker got the first touch to the ball before the players collided. Because Jonke got the first touch, referee Sorin Stoica pointed to the spot.

But that begged the question. If Jonke was alone one-on-one with the keeper, and Pickens was ruled to have fouled the striker, should Stoica have not just awarded the penalty, but a red card as well?

No card was issued, and Daryl Fordyce, who had a headed effort go off the post in the first half, took a penalty that went hip high, the perfect height for a keeper to make a diving stop. And Pickens, allowed to remain in the game, did just that.

But there were more moments of frustration. Aside from the two Fordyce chances, Pickens made a nice diving stop in the first half on a swerving left-footed effort from Jones. And, when the score was still 0-0, James and Milton Blanco broke in a two-on-one; Blanco moved the ball to James at the right side of the box. Instead of taking the shot, James tried to thread a ball back to Blanco, and it was cleared away. When the Eddies should have had Pickens at their mercy, they didn’t even get a shot on goal.

Late in the game, with the Eddies pushing forward for the equalizer, Brian Shriver — the NASL leading scorer from 2013 who moved from Carolina to Tampa — had a couple of chances that were denied by Smits.

Those saves allowed Ameobi to come on and perform some late heroics. As FCE prepares to take on the New York Cosmos at Clarke Stadium next week, the question has to be asked: Does Ameobi deserve to start?